Listening to the hype coming out of the Geneva Motor Show one has to wonder where the global auto industry is headed. Every one of the major car makers released details of new hybrid and new all electric vehicles, admittedly some in concept form like VW and Porsche but still accompanied with some grandiose projections on sales figures down the road. None more so that Renault-Nissan the struggling French-Japanese group who’s chief executive, Carlos Ghosn is reported to have claimed they will be producing half a million electric cars by 2013-14. We hope they have a big enough field to park them all in. After being available for 13 years, hybrid cars made up just 2.8% of the US car market in 2009 according to Hybrid Cars.com, equivalent to about 300,000 vehicles. Renault-Nissan are starting from scratch with electric cars and yet they are projecting 500,000 in three years time. Of course it is possible Renault know something we don’t. Maybe the French government is about to launch a massive electric car subsidy scheme as a catalyst to encourage buyers to switch. Certainly Renault have identified some of the markets concerns. They propose leasing the battery packs to car buyers, not selling them as part of the vehicle. At the end of practical life they intend to recycle them as power storage units.

Even the normally prudent and sensible VW group has caught the electric fever after staying out of the hybrid/electric market as others rushed to develop products. VW has finally said they plan an “unprecedented drive into electric vehicles, by which they mean 3% of total sales by 2018. VW produced 4.4m cars in the first 9 months of 2009 according to Car Blog, equivalent to 5.87m vehicles a year but numbers were flattered by the scrappage scheme in Germany during that period. However, VW’s sales in China are rising rapidly so 5.87m for 2010 may not be unreasonable. 3% would be 160,000 electric vehicles per annum in 8 years time. It’s not exciting and probably not profitable, but certainly realistic compared to Renault’s 500,000 in three. 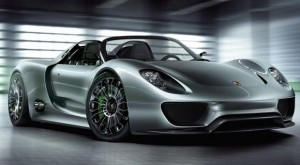 Even Porsche got in on the act with a 918 Spyder hybrid petrol-electric concept car at Geneva, an electric Porsche – is it just me?

Back to Renault’s CEO Mr Ghosn took the opportunity to raise the hype by voicing fears that the biggest constraint will be the availability of lithium ion batteries within two years. Japan, South Korea and China currently control 98% of the supply market but considerable investment is going into production facilities in North America and Europe so that situation is unlikely to continue for long. Meanwhile battery makers are scrambling for raw material supplies. Although experts say there is no shortage of lithium around the world, even at current prices, battery makers and trading companies are busy buying into extraction facilities in developing markets like Argentina, Chile and Bolivia ahead of the perceived demand.

Meanwhile research specialists Lux Research say Hybrid Electric Vehicles – HEV sales will reach roughly 3 million units annually by 2020 regardless of the price of oil. Plug in Hybrid Electrics – PHEVs need oil prices of around $200/bbl to reach that level of success, and pure Electric Vehicles -EV sales will be a factor of ten smaller even in this oil price scenario. While PHEVs and EVs may not live up to the hype, they still present a big market for batteries. Even in the low oil price scenario of $70/bbl Li-ion batteries for these vehicles will present a $510 million market, and the opportunity could reach $9 billion in the high $200/bbl scenario.

Of course much will depend on government incentives and subsidies. Left to the market and as a straight comparison with conventional internal combustion cars, electrification of cars in whatever form will remain a sideline. But if governments pour enough money into buyer subsidies and funding charging facilities numbers could be significantly different. Crystal ball anyone?