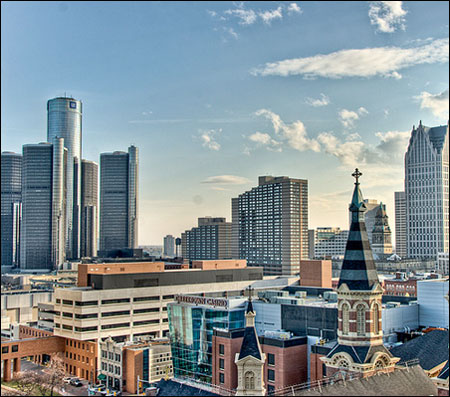 Photograph of Detroit by Jim Hunt

According to Rutgers Business School, “demanufacturing is defined as:

“Â¦the dis-assembly and recycling of obsolete consumer products. The goal is to remove and recycle every component in an appliance. For example, the motherboard and metal parts of a computer are smelted and the metals are recovered. The TV tube in the monitor is recycled and turned into a new TV tube. The computers plastic housing is recovered and turned into new computer housings. The goal of the process is to reuse all of the materials that make up the computer, not throw them away.

Today de-manufacturing is showcased in Detroit, where manufacturing was formerly a staple of the city’s history. In contrast to a step-by-step, put-together car at the end of the assembly line, de-manufacturing results in a “disassembled car. From his article Rouge in Reverse which highlights the sustainable manufacturing zeal of Trenton-based Huron Valley Steel Corp., writer Bill Saporito puts it this way:

“Call it historical irony, but at Huron Valley Steel Corp., the goal is the opposite of Henry Ford’s ideal manufacturing process. For Huron, the dis-assembly line starts with a clunker and ends with newly poured aluminum ingots. Some of this secondary aluminum is bought by the auto industry’s die casters, whose molds bend sheet metal into car parts, thus starting the manufacturing loop again.

Huron’s patented 60-in. (1.5 m) eddy-current rotor provides the means to separate the car metals (including zinc, copper, stainless steel and especially aluminum), which have become a larger part of car manufacturing. 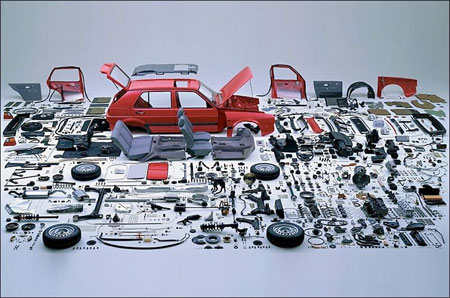 When it comes to extracting the ferrous properties of used and discarded cars, there is a newly added drive, answering the question posed by Huron’s Senior Vice President Richard Wolanski: “How do we get the percentage that is non-metallic? Like its major role in manufacturing, Detroit is striving to excel in its new venture, where cars avoid landfills, from cradle to grave.