Home | Commodities | When Cancelled Copper Warrants Aren't What They Seem

When Cancelled Copper Warrants Aren't What They Seem

For many metals buyers the concept of canceled warrants on the London Metal Exchange may seem at best a rather esoteric measure of activity in the metals markets and of little relevance to their reading of likely forward price movements. But metals analysts and columnists frequently quote the canceled warrants ratio as evidence of likely price increases or decreases to come or at least take such changes into their evaluations. Not wishing to be accused of a being a hypocrite you will find here at MetalMiner we have often cited such data as evidence of a trend in one direction or another, but we have always tried to temper such statements with supporting evidence because in itself the canceled warrants ratio is open to manipulation and/or misinterpretation as an article in the Financial Times clearly explains.

Actually the article does much more than point out the risks of misinterpretation it goes on to assert that the copper market in particular is being manipulated by market participants, with the direct result that the copper price is higher than it should be and at risk of a correction. Whether we would go that far we will reserve comment for a later and broader assessment of the copper market believing as we do that just looking at canceled warrants is too narrow but the article is a well written and welcome reminder that all markets and data can be influenced, and we should not look at one measure as the sole arbiter of market direction.

For a clear definition of the terms involved we would point readers to this short pdf document by Karvy Comtrade. It does better than most at defining canceled warrants, the ratio, and what happens to metal once the warrant has been canceled. It also gives the standard explanation as to how such movements are usually interpreted by the market; the explanation the FT article takes issue with.

The cancellation of a copper warrant means that the 20 tons of material covered by that warrant is no longer available to back the purchase or sale of exchange traded futures or forward contracts. The general presumption is therefore that the material has been removed from the warehouse and consumed by an end-user as this article in a blog typifies: “canceled warrants represent metal earmarked for delivery â€ investors cancel their warrants because they want to take it out of the LME warehouse, the blog said quoting the FT “So a rise in canceled warrants suggests more demand for the underlying physical commodity and deliveries thereof.

So the following graph showing a first quarter uptick of canceled copper warrants is good news for copper bulls right? 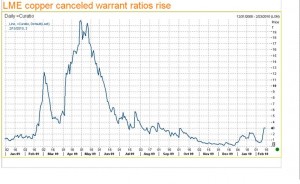 May be not says the FT. The article quotes Commerzbank who, puzzling over the canceled warrants data in a research report, observes “Nevertheless copper inventories at the LME continue to be in close proximity to their 6.5-year-high. Also, inventories in Shanghai are only lagging their all-time high by a small margin as well. In addition, there are large amounts of deliverable copper in off-exchange warehouses. The FT harks back to the nickel crisis in 2006 when reported inventory declines led to a five fold price increase, yet one trading house was controlling a large share of the warrants. When the authorities “suggested they make more metal available to the market, they did and the price came off.

So what the FT is saying is that by canceling a few warrants but not actually taking them out of the warehouse, or at best simply moving them into a non LME warehouse the market is being conned into thinking physical demand is picking up. When enough people believe that to be the case guess what?   Up goes the price.

Whether or not there is a long term bull market is not the point. Copper supplies could indeed get tight 3-5 years down the line but for now there is plenty of metal around and the FT is predicting a price decline coming soon. As they point out one can be sure those currently alleged to be influencing the market will be well sold by then.

PREVIOUS POST:
Aluminum Production Only for the Brave
NEXT POST:
Banking Reform: Coming to a Commodity (Metals) Market Near You