Oil prices have been relatively stable for the last few months. The great terror is over and a sense of new normal has settled on the markets while economies are not doing great they are at least slowly getting better. 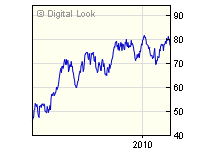 Belief in the China story remains sound albeit with hiccups every time the authorities tighten bank lending or reserve requirements. As a result, oil prices have ridden a more steady path through the sovereign debt crisis in Greece and occasional poor housing, employment or growth data along with robust US exports, stronger manufacturing PMI and decent corporate profits.

So when the 12 members of OPEC get together in Vienna this week they are unlikely to rock the boat by changing production quotas. As Ali Naimi, Saudi Arabia’s oil minister is reported in an FT article as saying recently (we paraphrase for brevity) producers and consumers are looking at the price and both can live with it, why mess with perfection? At $70-80/barrel, oil prices allow most producing countries to meet their national budgets and the price does not appear to be a factor in markets returning to GDP growth, albeit at considerably different rates around the world.

So all in OPEC’s garden is rosy isn’t it? No, actually they have some fundamental problems. Compliance with production quotas has slipped from 80% a year ago to just 53% today as some members grab market share. Angola has enacted none of the cuts it should, while Iran is pumping more than 400,000 barrels a day above its quota maximum. According to the FT, Iran, Angola, Nigeria and Venezuela have become the group’s biggest cheats, while Saudi Arabia, Kuwait and the UAE have increased their production only marginally, maintaining compliance of more than 75%. The risk is that even with demand predicted to grow at 2% this year supply will outstrip it and prices will fall. OPEC members are paying little attention and instead renewing longstanding calls to be allowed officially to pump more oil. Algeria, Angola and Nigeria are among those to have tapped new oil fields and expanded their capacity. So far a sense, if not the reality, of cohesion has managed to hold together. But that is about to change as Iraq, a member that has long been exempt from OPEC’s quota system because its industry has been stunted by war and sanctions, is now at the point of making a return. Iraq has signed multiple agreements with international oil companies to boost its huge but badly under invested oilfields which could add several million barrels of oil a day to production figures in coming years.

Due to a combination of increased drilling, particularly by Algeria, Angola and Nigeria, and the imminent return of Iraq as a sizable presence in the market the forward curve graph of future prices is flattening as traders anticipate greater availability of oil according to a Business Week article this week. The premium for crude to be delivered in 2015 compared with this year was $6.77 a barrel today, down from $11.96 three months earlier. The article quotes Edward Morse, head of commodities research at Credit-Suisse Group AG, “The world is still over-supplied, on the supply side Iraq overwhelms everything else. Iraq’s oil exports last month reached the highest level in more than a year, jumping 7.4% to 2.07 million barrels per day, according to the country’s Oil Ministry.

So although the speculative net long positions as reported by the Commodity Futures Trading Commission showed that speculators were extending their bets to nearly 110,000 lots on an oil price rally, the fundamentals are suggesting prices could come off later in the year. No bad thing for consumers and if in the meantime you feel hard done by while filling up your gas tank, spare a thought for your cousins in the UK. A combination of tax increases and tightness in refined petroleum products is predicted to push prices in the UK to the equivalent of US$7 per US gallon next month for standard unleaded fuel.