You are a Somali pirate in your high speed launch roaming the Indian Ocean in search of slow moving tankers or cargo ships. You are a South American drug runner stealthily running across the Caribbean towards the southern states with your cocaine haul. You feel secure in your high speed boat capable of 30-40 knots and lightly armed, large frigates can’t keep up with you or follow close into shore. So imagine your sense of foreboding when this looms over the horizon, bearing down on you at up to 50 knots and capable of firing 2 diameter shells at a rate of 4 per second or short range missiles from up to 24 miles away:

This is one of two new designs for what the US Navy calls its Littoral Combat Ship (LCS), littoral being the area between low and high tide and meant to indicate the vessels shallow water capability. The Navy is pursuing two options, both of which break the mold in terms of design and capability from anything that went before. Naval Technology.com defines the core capability as a full load displacement draft of 10ft allowing the ships to access very shallow waters. The ships will have a top speed of about 50kt and the range at sprint speed is 1,500nm. At an economical speed of 20kt, the range is 4,300nm. 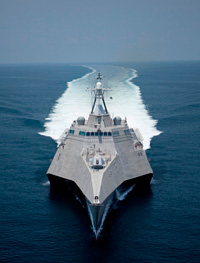 The first design as above is General Dynamics futuristic high-speed trimaran, based on Austal of Australia designs and experience with vessels like the US Marines’ Westpac Express high-speed transport and the Army and Navy’s TSV/HSV ships. The  Austal design is built at their Mobile, AL yard. The hull  and superstructure are marine grade aluminum, but the trimaran design offers additional stability options, and may help with hits to the ship’s sides under combat conditions.

The second is led by Lockheed Martin and offers a proven high-speed semi-planing monohull based on Fincantieri designs that have set trans-Atlantic speed records. The design will use a steel hull and aluminum superstructure. The Lockheed prototype has required additional bolt-on buoyancy fittings, however, and there have been persistent reports of weight and stability issues. 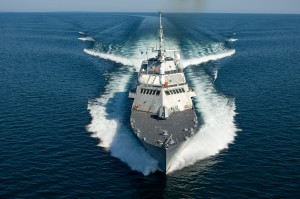 Unfortunately both designs are riven with controversy and some are questioning whether they really meet the Navy’s requirements. The Navy is calling for 55-60 of these vessels at a probable in service cost of US$600m each. They want to replace 30 frigates, 14 mine counter measures vessels and 12 coastal mine hunters. And therein lies the problem. The LCS is being asked to be a high speed shallow draft mine and submarine hunting jack of all trades. As a result, it lacks the firepower to play an effective role as a conventional frigate, the cargo carrying capacity to field serious helicopter support or the endurance needed by a global naval power and is meeting widespread criticism even from within the Navy. As Naval analyst Raymond Pritchett described the compromises on offer in a Defense Industry Daily article as:

…the LCS is a 3000 ton speedboat chaser with the endurance of a Swedish corvette, the weapon payload of a German logistics ship, and the cargo hold of a small North Korean arms smuggler.

Both yards are building two vessels for assessment and according to Defense News sometime this spring or summer, the Navy will choose one of the designs as the basis for a further 51 more LCS ships. Which way it will go remains to be seen but both teams have had their second vessel canceled and then re-instated after cost overruns and design changes were required. Still as metal-heads we are glad to see a conservative organization like the US Navy pushing design boundaries in this way. In the long run, it will be good for naval ship design. Meanwhile aluminum suppliers must be viewing the project with baited breath. The commercial market for fast catamarans alone spawned enough marine grade aluminum business to stimulate the development of specialist marine alloys by producers like Pechiney, now Alcan, and Hoogovens, now Corus nearly ten years ago. The military market for LCS and the very similar non combatant HSV transport vessels could have an equally beneficial impact on North American aluminum producers in the decade to come.