Not that you would but anyone who thinks the Chinese pipe manufacturers will suffer unduly from the countervailing duties imposed by the Commerce Department last month only needs to look at the phenomenal infrastructure investment going in China’s gas network to realize they have more than enough work in their home and the local Asian markets. Baosteel for example just  secured a 550-km (330 mile) steel pipeline for BG Group Plc’s coal steam gas-fed liquefied natural gas plant on Curtis Island in Queensland (said to be 42 in diameter and on its own equivalent to half of China’s imports into the US at their peak two years ago). The gas produced from BG’s LNG plant will mostly be shipped to China where a rapid revolution is going on switching all manner of fuel consuming activities from oil and coal to gas.

According to a Reuters article, China’s consumption of natural gas is set to triple by the end of this decade as everything from aluminum smelters and power stations to residential heating, cooking and taxis are increasingly being powered by gas or gas derivatives.

To meet this demand, the country has gone on an unprecedented gas pipeline construction program adding trunk and branch lines from production in the west to consumption in the east. Between 2009 to 2015, the state plans to build new trunk lines of 24,000 kms (14,500 miles), with total pipeline reaching 48,000 kms, double that of 2008. And, according to Reuters, the project, will be a big one as it is, “One of the most ambitious is the West-East linking fields in Turkmenistan with those in Kazakhstan and Uzbekistan and piping the gas through to China’s power hungry east coast.” 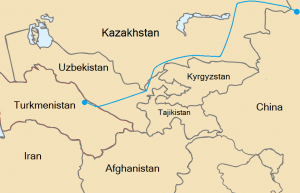 Further pipelines are being laid from as far away as Myanmar, Mongolia and China’s far western provinces, while long term LNG constracts have been signed with Qatar, Indonesia and Malaysia said to be worth $100bn.

China sees gas as a major plank in its efforts to reduce pollution from coal fired power stations. The goal is a 40-45% cut in carbon dioxide per dollar of national income by 2020 from the 2005 level. Natural gas is seen as cheaper and quicker than alternative energy sources like hydro and nuclear. But it is not just industry and power generation that is consuming natural gas. China added nearly 2 million square meters (20 million sq ft) of new apartment space every day in 2009, 20% more than 2008, according to a Reuters article and most would have gas links. “The residential use has often been under-estimated,” said Yan Kefeng of Cambridge Energy Research Associates (CERA), adding that the potential is huge to replace the more pricey and dirty “city gas” — gas made from coal or heavy oil that millions of houses are connected to.

When you hear of projects like this consuming vast quantities of steel not just last year or this year but projected forward for the next decade one can appreciate why China has rapidly become the largest producer and consumer of so many metals and why, all being well with the economy, it is likely to continue for some time to come.