When you boldly go where no man has gone before there may be a good reason why you are on your own. We hope that’s not the case for the UK marine renewable energy sector but the level of government (or should we say taxpayer) funding required is so immense one has to ask maybe there is a good reason why the UK is a world leader in these technologies. The Crown Estates that owns mineral rights, including the seabed, in the UK has announced ten schemes expected to be capable of generating 1.2GW of electricity around the Orkney Islands and on the Pentland Firth off the northern coast of Scotland. According to a Telegraph article, the combined cost is expected to be some £4bn to install and will require a further £1bn more of taxpayers money to build new grid connections, harbors and other facilities in Orkney and Caithness we suspect this is a conservative number, the distances involved will probably require DC transmission which is hugely expensive to set up as we recently wrote about.

The projects comprise six wave energy developments potentially generating 600 MW and four tidal projects potentially generating a further 600 MW. You will notice a lot of “expected and “potential. The problem is this technology is still being developed and is as yet largely unproven beyond the trials or experimental stage. Britain however will not be the first to install a wave machine. Portugal took that award back in 2008 admittedly using British technology from a firm called Pelamis when they announced the installation of three 140 meter long cylindrical steel wave machines off the coast of Agucadoura in Northern Portugal. The three machines generate 2.25 MW and have been sufficiently successful that the Portuguese are proceeding with a further 20MW.

The wave power generators vary depending on the manufacturer but this design by Pelamis could be said to be the front runner as they have had projects in commercial operation for some years now and have been actively developing the technology via sea trials since 2004.

A different design anchored to the seabed and sited closer to the sea shore looks like this and is predictably called the Oyster, made by a firm called Aquamarine. 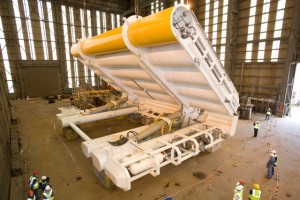 The Oyster is a simple mechanical hinged flap connected to the seabed at around 10m depth. Each passing wave moves the flap, driving hydraulic pistons to deliver high pressure water via a pipeline to an onshore electrical turbine. Multiple Oyster devices are designed to be deployed in utility-scale wave farms, in this case scheduled to be 200MW in total.

Possibly of greater potential are the tidal power generators of which Open Hydro were one of the successful firms bidding for the Pentland Firth sites with their seabed mounted machines like these: 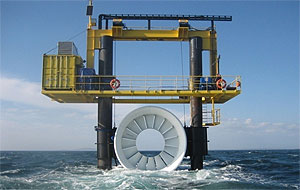 The first 6m test unit produces enough energy to supply 150 average European homes and production turbine diameters will be on the scale of hydro-electric power plants. As with Pelamis, Open Hydro’s website has video of their equipment in trials.

Environmentally wave and tidal power has to be preferable to wind power if for no other reason than they are either invisible or barely visible arguably Aquamarine’s Oyster would be pretty visible from the shoreline, and as overcome a major objection to wind power towers, namely the unsightly spoiling of open countryside and the noise from whirling turbine blades. But in one other sense they suffer from the same drawback, namely they are not economically viable (or not without subsidy which amounts to the same thing). Whether scaling up to mass production will achieve lower costs per KWh remains to be seen. Let’s hope that proves to be the case for British consumers and tax payers.