We can’t believe we published this piece almost one year ago (May 14 to be exact) posing the question: “Will Congress Put a Stop to China Currency Manipulation? The answer then, a resounding no as a currency manipulation bill died a fast death. But that was then and this is now. The “China Manipulates its Currency political agenda, if you can call it that, has some new life. And some of that new life has come, quite frankly, from people like me (a former ardent free trader) who decided to pour over the data. A year ago (in that linked piece above) we published the RMB-USD exchange rates from 1981 to the present. And though back then, we asked readers to form their own conclusions the evidence has convinced me personally that the currency has been manipulated. That, however, does not represent the only evidence. In fact, we did some investigations of our own to look at just one portion of the metals market, steel imports and exports. Shockingly (or perhaps not, depending on where you sit) the US currently has a $6.3b trade deficit with the rest of the world. We also reminded readers that the domestic steel industry operated with an average 65% capacity utilization last year. Here are the trade numbers again for review: 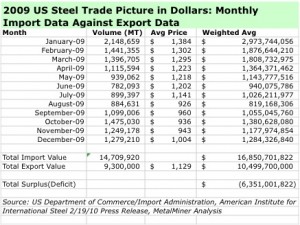 So what is new now in 2010? Two fascinating bits of information; first China ran an $8b trade deficit this month (this hasn’t happened since April of 2004) according to Gordon Chang who wrote the affectionately titled book “The Coming Collapse of China. Second, Chang suggests a new movement in support of forcing China to revalue its currency appears to have taken hold (Chang quotes Paul Krugman who suggests a 25% surcharge on Chinese imports would make sense without a more freely floating currency). But MetalMiner readers know that Krugman wasn’t the first person to suggest such a solution. In fact, Warren Buffett first proposed such a policy way back in 1999. We covered Buffett’s ideas in a two part series in April of 2009, here and here.

This time around, a bill in Congress just may see the light of day and move to a full floor vote by the end of May (at least that’s what Senator Charles Schumer D-NY) hopes. The bill has at least some bi-partisan support as Senator Lindsey Graham R-SC) also wants to see some action on the bill suggesting currency reforms have not moved fast enough. The bill would place anti-dumping duties on products coming from countries that don’t act to realign their currencies.

How likely will China continue running a deficit? Chang doesn’t think too long because “Chinese officials think exports will recover this year. And, as he cleverly puts things, “Beijing it appears, is manufacturing a trade deficit.

PREVIOUS POST:
New Airframe Construction Techniques Lowers Both Manufacturing and In-Service Costs
NEXT POST:
Is Zinc Headed For a Crash?