The International Lead and Zinc Study Group (ILZSG) explains in their latest monthly bulletin that the market shifted into significant excess production last year according to Reuters. Global refined zinc production has come back strongly such that it stood at 932,100 tons in January 2010 compared to 683,000 tons in January 2009. 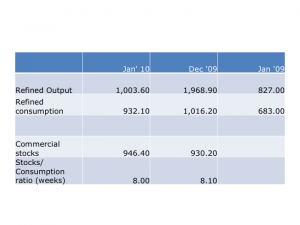 Producer stocks have continued to rise, from 311,000 tons in December 2009 to 320,000 tons in January.  LME zinc stocks ended February higher at 541,375 tons from 497,125 tons a month earlier. Warehouse inventories jumped sharply by almost 40,000 tons on February 17 following the arrival of a previously deferred shipment. Currently they are still close to these levels and at the end of February equated to more than 17 days of demand, levels not seen since November 2007 according to a Reuters report.

The problem, according to CRU, is idled mine and smelter capacity has been brought back on stream too quickly. At current prices all smelters can make money and there is little incentive to remain out the market when prices are some 20% above the cost of production.   Yet at the same time, demand outside of China has been slow to recover. In the words of Graham Deller of CRU, “Demand is more patchy than expected, the upturn has been delayed a bit and meanwhile all the mines are coming back on stream. The surplus is going to be even bigger than we previously thought — around 1.5 million tons of metal,” he added.

If that proves to be the case, price spikes earlier this month could be the peak of the market for the time being. HSBC, in a report last month said they felt the market had risen too far to fast and were expecting a correction. Since then, prices have come off. How much further they have to go may in part be a result of how much further stocks are seen to rise.