In the discussion of rare earth metals, minor metals and the range of new applications relying on these types of metals, we’d argue that tungsten tends to get lost in the shuffle. Yet it probably shouldn’t given some of its key properties used most notably in electrical applications such as incandescent light bulbs and for high temperature applications such as rocket engines nozzles and aerospace applications as well as wear resistant materials used in a range of industries from mining to construction. According to the latest USGS survey, Tungsten, “World tungsten supply was dominated by Chinese production and exports. China’s Government limited the number of exploration and mining licenses for tungsten, restricted the amounts of tungsten that could be produced and exported, imposed constraints on mining and processing tungsten ores, continued to shift the balance of export quotas to favor value-added downstream tungsten materials and products, and adjusted export taxes on tungsten materials.

Last week’s announcement then from China’s Land Ministry should come as no surprise as it has stopped accepting applications for new mines through June 30, 2011 according to this Business Week article.

The Chinese have said the policy to curb exports have more to do with “protecting resources for domestic demand. But the practical effect of such moves will involve higher prices (perhaps the real reason the Chinese wish to limit tungsten exports). APT prices (an intermediate product) for the European market appear below: 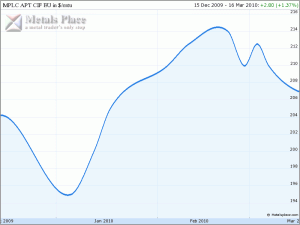 In addition, China will limit production to 80,000 tons annually. And according to another article, China consumption of tungsten equates to approximately 25,000 tons. According to the USGS latest survey, the US consumed just under 11,000 tons.

Prices in the US for tungsten concentrate (Wolframite) averaged $150/mtu. We’ll continue to monitor tungsten developments.