A recent Sydney Morning Herald article gave a very bullish prediction on global steel production saying production for the first calendar month of 2010 was a record 113.4 million tons, exceeding the previous record for the month of 112.9 million tons in 2008. Concerns were raised by Moody’s and have been mirrored elsewhere that so much is dependent on growth in China continuing. Concerns exist that either stimulus measures will be prematurely removed or rising inflation will force Beijing to reign in growth by tightening credit or raising interest rates. Reporting on the Japanese market, Reuters said this week that Japan’s crude steel output is expected to keep growing in the April-June quarter on strong exports of automotive sheet steel, although the recovery lacks strength due to weak U.S. demand, the Japanese Ministry of Economy, Trade and Industry said on Monday. Crude steel output in April-June, the first quarter of Japan’s financial year, is seen rising 37.1% from the same period last year to 26.17 million tons. According to the article, the world’s second-biggest steelmaker Nippon Steel Corp and sixth-ranked JFE Holdings Inc are raising production to meet demand from fast-growing Asian economies, particularly China.

If so much relies on the China market continuing to do well we thought a review of prices in the domestic steel market this quarter may give some early signs of possible weakness. If spot market prices have flat lined or worse are dropping it would suggest the market is in oversupply and optimism on the part of other Asian producers is misplaced.

The following graph is taken from the MetalMiner IndX that tracks a range of daily ferrous and non ferrous metal prices in China. 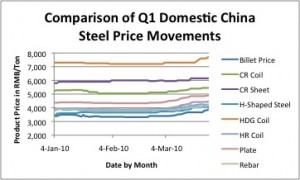 As we can see the trend has been for a gentle dip around the Chinese New Year in February when the markets were quiet either side of the holiday and the exchanges largely closed for a week. But since then prices have again been moving up particularly for billets a precursor for the production of bar and other long products, and rebar and H shaped beams both used in the construction industry.

This ongoing strength in spite of credit tightening supports reports elsewhere that the market is continuing to consume metals at a robust rate and although Beijing’s cautionary moves have spooked some investors they have not yet had any impact on the rate of growth.

Although it is unlikely growth in demand will significantly pick up in Europe this year and will be relatively slow to come back in the US, it is a fair probability prices will continue to rise due to rising raw material costs. This will likely impact China and Europe before the US where steel producers are more reliant on annual and spot priced iron ore imports from Brazil and Australia, and coking coal from South Africa and Australia both of which are set to roughly double this year. It will be interesting to see if the strength of the steel market allows producers to pass these costs on and still retain the volumes currently being produced.

PREVIOUS POST:
Brazil Targeting 5.5% GDP Growth to the Middle of the Decade
NEXT POST:
The Benchmark is Dead, Welcome the Swap