Paris has the Eiffel Tower as a leave behind of the Exposition Universelle of 1889. It was never intended to last as long as it has and at the time met criticism from some quarters that it dominated the Paris skyline. Now nobody could imagine Paris without the elegant Eiffel Tower and like the Statue of Liberty is to Manhattan, has become synonymous with the city it watches over. Whether Boris Johnson, London’s charismatic mayor, had these landmarks in mind when he cornered Lakshmi Mittal with his harebrained scheme in a gentleman’s cloakroom in Davos is unclear but the result of that chance meeting may come to dominate the east end of London in the same way when the 2012 London Olympics are long gone.

According to a Telegraph article Johnson helped choose the winning design from 50 submissions, after putting out a brief that he wanted a tower that was at least 100m (328ft) high to attract tourists to the Olympic Park in Stratford, east London. The winning bid came from Anish Kapoor undoubtedly one of the most popular and wealthy artists working in Britain. His retrospective at the Royal Academy last year was a smash hit: it attracted some 280,000 visitors, making it the most successful exhibition by a living artist held at the RA, as well as the most popular exhibition of sculpture ever staged in London. Kapoor has come a long way since the seventies, when he spent six months training as an electrical engineer, before struggling as a young sculptor. In 2004, he was commissioned to design an enormous entrance to a subway station in Naples. Cloud Gate, an irregular ellipse of polished steel, resembling a beautiful vast shiny bean, was followed in Chicago’s Millennium Park in 2006. Kapoor will almost certainly be remembered by later generations as one of the greatest structural artists of his age, blending art with engineering. All his massive structures have been designed and constructed in partnership with Cecil Balmond, deputy chairman of engineering firm Arup, proving artists can be engineers and engineers can be artists. 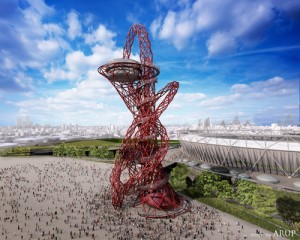 Kapoor’s Orbital Tower will not rival the Eiffel Tower for size, at 377ft it will be just 10% bigger than the Statue of Liberty and unlike the classic lines of that famous statue the tower is a modernist looping lattice of tubular steel or in Kapoor’s words “There is a kind of medieval sense to it of reaching up to the sky, building the impossible. A procession, if you like. It’s a long winding spiral: a folly that aspires to go even above the clouds and has something mythic about it.” according to a quote in the Huffington Post.

The structure is to be now known as the ArcelorMittal Orbit after the billionaire Lakshmi Mittal, who is donating 1,400 metric tons of tubular steel for the project and meeting £16 million of the £19.1 million total cost. The public will be able to climb up the spiral to take in views across the city of London from an observation deck at the top and the tower is expected to draw hundreds of thousands of visitors during the games alone.

A slightly ironic but may be fitting monument to multicultural Britain that the country’s largest piece of public art should be created and largely paid for by two Indian born and now naturalized British citizens.