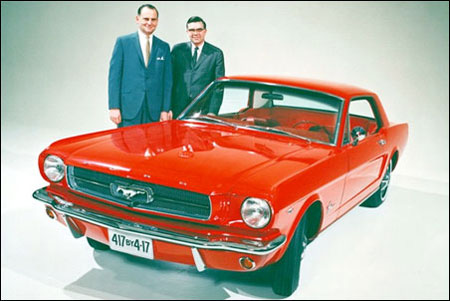 One of the courses I took during my 2004 graduate studies focused on design and business. Guest speakers were a weekly part of the agenda. One of them was Donald N. Freyâ€then an Engineering Professor at Northwestern University where he taught innovation, entrepreneurship and information systems. This triad of specialties makes sense, since Frey played a chief part in making an iconic automotive design: the original Ford Mustang, which debuted at the New York World’s Fair on April 17, 1964.

I don’t remember much of Frey’s time with the class, but I recalled his humble and entertaining telling of prototyping the design of the Mustang. I think his basement was part of the process. His attitude and work were cunning and the pace was rapid. The program to conceive and make the Mustang took 18 months. Within two years of its release, more than one million cars were sold.

From joining Ford in 1950, Frey was most proud of his efforts to improve safety. The implementation of disc brakes and radial ply tires have helped reduce automobile accidents.

Frey left Ford Motor Company in 1968 to lead General Cable Co., and then became Chairman and CEO of Bell & Howell in 1971. While at the latter, he helped engineer the first CD-ROM and became an influential player in steering Hollywood to release its films on videotape, thus launching the home-video entertainment industry.

Gina Myerson, Assistant Dean of McCormick School of Engineering and Applied Science at Northwestern University, described Frey as a person who backed up his sense of business with actual work:

“He really loved to bring concrete examples to discuss with students because he wanted them to think about real world problems. He was able to augment what he saw today because of his personal experiences with the design process.

More than being a mouthpiece, Frey said in an interview:

“I teach from experience. I don’t have any research. I have a lifetime of industrial innovation. For me, teaching and innovation depend on one another. I don’t know how to separate them.

When Frey left the classroom, one of my classmates expressed something like “Whoa, that was Mr. Mustang. Exactly. Donald Frey passed away earlier in March at the age of 86.