Last year the premium Chinese buyers were willing to pay for physical delivery of copper be it refined cathodes or scrap was sufficiently high compared to the world price, as determined on the LME. That traders could buy metal on the LME and ship it all the way to China, pay local VAT and still sell it at a profit formed the basis of this buying surge. This is termed the LME-SHFE arbitrage window and is often taken as an indication of the strength of Chinese demand relative to the rest of the world. Of course in practice not much metal was purchased on the LME, although much metal was imported into China most of it came direct from refiners around the world but was priced at LME levels.

So with the markets so focused on Chinese demand (even Freeport McMoran Chief Executive Richard Adkerson said in a Reuters interview the company’s investment decisions are heavily influenced by China’s role in global demand) we were keen to read an analysis by Reuters on how the arbitrage window has behaved over the first quarter. As the following chart shows, China’s imports since this autumn have been way below the levels seen in the first three quarters of 2009. 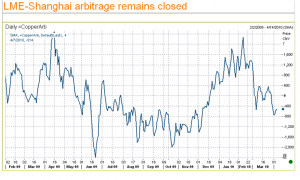 Admittedly that 8-9 month period in 2009 included massive SRB re-stocking but in large part the buying was speculative whereas what we have been seeing since the late fall is for consumption.

As a result, or may be because the arbitrage window has been closed, that is SHFE copper prices after deduction of VAT and import costs has not been above the LME or world price. Consequently imports have been relatively stable at a level only slightly up from that prevailing for much of 2007 and 2008. The proportion of refined metal, anode and scrap have varied depending on the relative price of copper contained and availability of scrap but as far as raw material input is concerned the forms are interchangeable.

Imports of refined metal are expected to be lower in March than they were in February and material in bonded warehouse in Shanghai is said to be some 200,000 tons, double the level from a month earlier.

What does this tell us about the current state of Chinese demand? Is the market in oversupply and is there the possibility these speculative stocks will come back out onto the market? Traders quoted in a Reuters article say spot copper prices in the local Shanghai market are trading at a discount to the nearest month SHFE price. This reflects that the physical market is in oversupply. But a recent Standard Bank report suggests Chinese copper demand is still growing at about 8%, in line with the economy as a whole. Provided tightening of bank lending or raising of interest rates is not too severe, the material held in stock will stay there and gradually be consumed rather than be re-exported into neighboring countries.

Meanwhile the LME driven by increasingly encouraging numbers from the US remains remarkably robust rising to within a whisker of its previous high almost exactly two years ago as the following graph taken from the www.lme.com website shows: 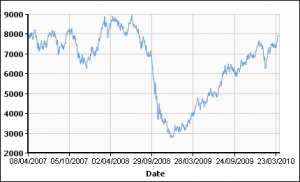 The preliminary Chinese import/export figures are due out next week. It will be interesting to see how March compared with the previous month’s. Physical premiums in Europe are picking up possibly indicating that re-stocking is gathering pace. The second quarter is a seasonally strong period for copper and the bank says they are looking for further upward movement in price. We would want to see a return of stronger Chinese demand before we were confident prices could make a sustained move above $8000 per ton and either way we expect they are going to remain volatile as markets react to fiscal, currency and trade news.