The device is known as a memristor (or memory resistor) explains an article in the NY Times and was first conceived by Leon Chua working as an electrical engineer at the University of California, Berkeley in 1971 but it was not until 2008 that the idea was put into effect by Hewlett-Packard scientists at their labs in Palo Alto. 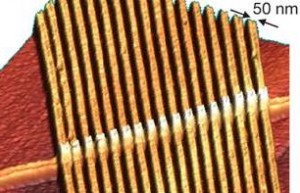 According to the article the H.P. technology is based on the ability to use an electrical current to move atoms within an ultrathin film of titanium dioxide between platinum electrodes. As its name suggests, the TiO2 molecule contains two oxygen atoms for each titanium atom, www.memristor.org HP researchers found that they could manipulate the oxygen atom and thereby control how the device functioned. After the location of an atom has been shifted, even by as little as a nanometer, the result can be read as a change in the resistance of the material. That change persists even after the current is switched off, making it possible to build an extremely low-power device. Electronics at the nano level gets awfully complex so we won’t even try quoting any of the recent research here. It may be that other molecules exhibit the same properties but for now titanium oxide is the front runner.

The most advanced transistor technology today is based on minimum feature sizes of 30 to 40 nanometers â€ by contrast a biological virus is typically about 100 nanometers â€ and Dr. Stan Williams, a company physicist said that H.P. now has working 3-nanometer memristors that can switch on and off in about a nanosecond, or a billionth of a second. He said the company could have a competitor to flash memory in three years that would have a capacity of 20GB a square centimeter. “we believe that will be a factor of two better than flash memory will be capable of in that time frame.

The workings of the memristor has been likened to that of synapses in the human brain and the potential held out that working at such densities designers could build a computer that would rival the human brain according to some sources.   In practice every new invention in electronics has been likened to the human brain. It is the holy grail of the computing world. In reality, the memristor is probably no more like human synapses than other electronic devices. The promise for this new technology is in its power density and that is something electronics geeks are keen to see realized. Makers of existing dram memory are dreading the possibility their investments will become worthless overnight.