It’s China again and it’s driving copper to over $8,000/ton. “To some extent this has never been a fundamental story, it’s been the weight of money,” said Robin Bhar, analyst at Credit Agricole quoted in a Reuters article.

When it comes to copper, it’s a balanced market, moving into deficit and it’s the China story again.” Since the beginning of `February the price has powered up some 25%.” 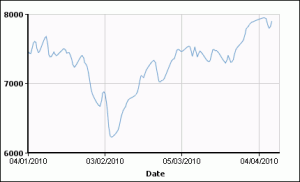 From a lull around the time of credit tightening in China and the Chinese New Year imports of unwrought and semi-finished copper surged 41.6% on the month, surpassing estimates by traders and analysts for the second straight month and reflecting strong term and financing inflows to the country according to Reuters. Sentiment is said to be helped by the formal provision of a $30bn loan for Greece should the country decide it needs it and a weaker US Dollar which usually yields rising metals prices. Nevertheless investment in copper has been helped by ETF inflows running at high levels and a return of risk appetite among investors.

How much longer this run will last remains to be seen. The fundamentals for copper are certainly better than some metals. Supply and demand are broadly in balance but Andrew Harding Rio Tinto’s head of copper said in an interview last week he expects to see a deficit in global copper supply next year after a balanced market this year, with China likely forced to draw down strategic reserves to help meet demand. He went on to say the company could struggle to maintain its copper production rates for the next few years as ore grades decline, until the massive Mongolian Oyu Tolgoi project comes on stream in 2013.

Although one would expect mining executives to be bullish for their products it does seem his position is shared by a large part of the investing community for whom a move above $8,000 per ton will be a buy signal to push the price up further.

PREVIOUS POST:
Evraz Steel – Returning to Profit in North America and in Russia
NEXT POST:
Nickel Still Powering Ahead as Stocks Continue to Fall