Nickel Still Powering Ahead as Stocks Continue to Fall

Claims that various parties are manipulating the nickel market are understandable when you look at the rise in prices. But delve a little deeper, and it looks less like manipulation and more like excessive exuberance on the part of investors and traders. Stratton Metals was accused last month of being behind an unexpected rally in prices when it was found they had withdrawn a large quantity said to be 4,000 tons from the market in one day and helped to put a squeeze on nearby prices. The firm strongly denied the withdrawal constituted manipulation saying the material was needed for an end-user client of theirs, but in an increasingly jumpy and tight market observers will jump on such transactions as support for a particular point of view. 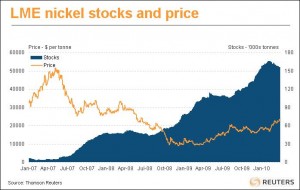 This Reuters graph shows how prices have moved over the last three years with price and stock levels in opposite cycles. With stocks falling and prices rising investors believe we are set for another return to sustained high price levels. Those that are long are probably smiling at those that are not and may feel they have already missed the boat; those that are short should be worried.

Step back and look at the fundamentals and old fashion supply and demand seems to have more to do with it than manipulation. A recent survey of 11 delegates at the Second Annual Euro Nickel Conference in London reported in Reuters said the market would be 23,500 tons in deficit this year with Chinese demand alone rising 14% to 525,000 tons. With Chinese nickel stocks estimated to be about 110,000 tons, that still represents some 2.5 months of supply but importers may not readily release that metal into the market if they see prices continue to rise. Interestingly though although China demand appears to make up a large part of the bullish tone to the nickel market, prices in China are actually at a discount to the LME suggesting it is non China Asian demand and recovering European demand that is underpinning the market. 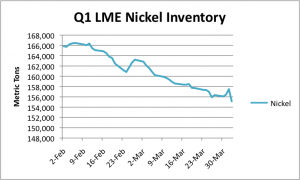 Often a demand indicator LME stocks have been falling in recent weeks, this graph of LME stocks over the last two months shows a sustained downward trend, supporting the conference statement that the market is probably in deficit and LME stocks are being accessed to meet end-user demand.

The supply market is finely balanced though. Return of full production at Vale’s Sudbury operations for example could wipe out the deficit in one step. So although falling stocks and rising prices may be taken by bulls as a solid trend for the year the reality is we should expect volatility in prices, supply side news or a hiccup in China could knock 10% off nickel prices in a matter of days.

PREVIOUS POST:
Copper Prices Heading Higher
NEXT POST:
China Subsidizes its Solar Firms Can the US Industry Draw on Lessons From the Mini-Mills?