Home | Commodities | Palladium, Where to Now?

Palladium, Where to Now?

Is Palladium over valued and due for a fall or is it the new darling of the investment community and set to rise further in the coming months? Yes or no to both depending on who you read.

Back in January we wrote our Price Perspectives for platinum, palladium and rhodium in which we analyzed the supply and demand markets for these metals and looked at the key factors likely to drive prices in the year ahead. That analysis has proved to be remarkably prescient and in the case of palladium price movements have been so significant we thought it would be interesting to dive a little deeper into just two of the key drivers to see what is happening three months on.

Certainly Palladium’s rise has been dramatic this first quarter of 2010, from starting the year at about $420/ounce the London Fix has risen to over $540/ounce this week, a near 30% increase. So what has driven the increase and what is in store for palladium prices going forward? Well to judge the future it helps to understand the past. There have been a number of factors in palladium’s favor driving up the price. First, the fundamentals have been sound, due to its much lower cost than platinum the metal has been partially substituted for platinum in the mix of PGM’s used in automotive catalytic converters, particularly in diesel engines. In a recent note to investors, Standard Bank advised global auto sales are still on the rise, and China remains in the lead.  Why is catalyst demand so important, the following graph from the Market Oracle illustrates the dominant role the automotive market has on palladium demand, with one exception ETF demand which we will come on to shortly. 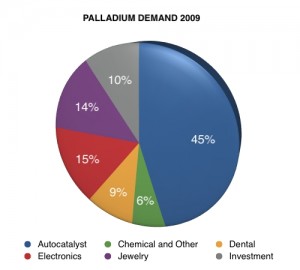 According to Standard Bank, Japan’s auto sales for March have risen on a m/m and y/y basis. US auto sales in March were up too. China’s auto sales for March have posted a 56% y/y increase. Base effects make sales growth look spectacular. But even in absolute terms, auto sales in the four large markets (Japan, Europe, US and China) are rising fast; the recovery that started in June 2009 continues. Japan sold 674k vehicles in March, this is 24% more than February 2009, and a 47% rise month on month. The US recorded total auto sales at 1.06m units in March, this is 24% more than March 2009, and a 36% month on month increase. China sold 1.7m units in February, up 56% y/y and 43% m/m. Clearly physical demand for palladium is rising.

At the same time that demand is increasing supply looks like it could potentially be constrained. 80% of the world’s supply comes from just two sources, energy constrained South Africa and potentially unreliable Russia. Russia has repeatedly shown it is willing to use supply of its natural resources as a political weapon without concern for the consequences down the supply chain as with a dispute over natural gas with its neighbor the Ukraine last year illustrates much of south eastern Europe suffered a cut off in gas supplies and prices spiked for the rest of the continent. Russia has been a source of supply from both new mining and its national stockpiles. According to this site these Russian palladium stockpiles were built in times of excess supply, during the seventies and eighties, and used in order to balance the market. During the nineties when Norilsk Nickel production could not meet growing palladium demand from the auto-catalyst sector, the gap was filled by state stockpiles from Gokhran, the Russian precious metals agency (which is part of the Ministry of Finance), and by the Russian Central Bank sales. The spot price for palladium spiked to over $550/ounce this week when Anglo Platinum said that the global market for the metal may be in deficit for much of the next decade due to the combination of increased industrial demand and the depletion of those Russian stockpiles.

In a recent article, the Telegraph newspaper reported investment demand in 2009 for physical gold surpassed jewelry buying for the first time since gold hit its inflation-adjusted high in 1980. Demand almost doubled over the course of the year, with high prices and the global economic downturn causing demand for gold jewelry to slide 20%, quoting metals consultancy GFMS. On the back of a strong interest in gold all the precious metals are being bought aggressively for their own long term value and as a hedge against dollar weakness and inflation. The most popular form of investment are Electronic Traded Funds such as the new ETF Securities physically backed palladium ETF launched earlier this year. The Telegraph article quotes RBS in saying the inflow of money into palladium ETFs worldwide was equivalent to 28% of estimated palladium consumption in the first quarter of the year. The launch of the new US fund has resulted in the amount of palladium held as an investment to rise 48% over the quarter.

So is the rise in the palladium price another spike like we saw back in the early part of the last decade, to be followed by a crash back to $150/ounce? Almost certainly not. The previous rise was much sharper and a sudden switch to silver alloys in cell-phone electronics pulled the rug from prices on that occasion. The rise this time appears supported by more factors but a correction is not unrealistic. Although palladium is back around its long term 3:1 ratio with platinum, the rise this year has been largely due to heavy physically backed ETF inflows. Once this settles down to growth levels seen in other PGM’s, so will demand. The long term fundamentals for palladium look sound but we would expect the price curve to flatten from here this year. Substantial further increases will begin to impact long term physical demand growth.

PREVIOUS POST:
Mongolia the New Frontier
NEXT POST:
Purchasing Shuts Down Can MetalMiner Fill Part of the Gap?