After reading Stuart’s earlier post regarding a potential fall for aluminum, we decided to drill into Alcoa’s latest earnings announcement to identify some of the small signals which would support (or not support as the case may be) the underlying assertions that the aluminum market may stand ready for a correction. To do that, we turn to Alcoa’s 1st Quarter 2010 Earnings Conference Call powerpoint presentation available here.

The good news when looking at Alcoa revenue by end market, growth appeared in 61% of its segments such as automotive, commercial transport, industrial products, alumina and primary metals. Other sectors still show a year over year decline (e.g. aerospace, Beverage and can, IGT, Packaging, Distribution/other). The realized aluminum price according to Alcoa, increased by 8% whereas alumina price realization increased by 13%.   We won’t spend time focusing on Alcoa’s internal cost reduction initiatives though they also appear quite positive. Alcoa sees demand for flat rolled products increasing in the second quarter based on “modest improvement in aerospace and industrial markets. In addition, Alcoa still forecasts a global demand growth rate of 10% from last year (which isn’t saying much but still, a step in the right direction). Global aluminum supply remains balanced, again according to Alcoa and the surplus of primary aluminum is “manageable. That’s the good news.

The not so good news includes the following 39% of Alcoa’s revenues still come from year over year declining revenue changes including aerospace. Looking at Alcoa’s “earnings bridge analysis (that depicts which variables moved favorably vs. unfavorably quarter to quarter) as one can see volume remains light and energy costs dragged income. (The LIFO allowance fluctuates but is always a negative number) 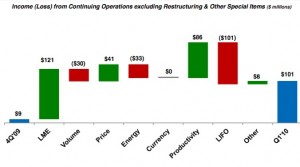 In all sectors of Alcoa’s business, with the exception of Engineered Products and Solutions, volumes hit performance.

Our conclusion? A high and/or rising aluminum price certainly has a disproportionate (positive) impact on earnings. And though the company appears to have made great strides in its own cost reduction and working capital efforts, overall demand still suggests a worrisome set of signals. Combine that with the earlier post on an aluminum market correction and one can see why the analysts feel the Alcoa earnings announcement was a mixed bag.