Aluminum is looking vulnerable. Although the market has been in oversupply for at least the last two years and exchange traded stocks have risen to record numbers, prices have been supported by a financing game that goes like this. Banks and large trading houses can buy or take delivery of primary aluminum ingot at spot or up to three months forward prices and sell that metal for delivery 15 months out on the LME. The 15 month forward price has been consistently higher than prices for shorter time frames, by virtue of a strong forward price curve or contango, as the following graph courtesy of the LME shows: 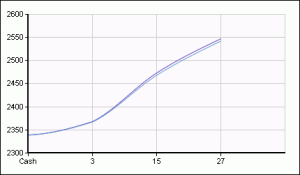 For much of the first half of 2009, the difference between 3 month seller and 15 month buyer prices was 8-9% of the 3 month price, leaving room for a little profit after warehousing costs, insurance and finance if you can access the ultra low interest rates that have been available based on Fed/Central bank rates of 0.25% or so as the banks and major traders can. Major central bank rates have not crept up yet although there is expectation that Fed rates will have to rise later this year in the US if the economy continues to sustain its current promise. But the forward price curve has been flattening as the metal price has risen such that now the difference between 3 month seller and 15 month buyer is just 4%. Even after this weeks drop and compared to the cash or spot price the difference is only 5%. As the margin has narrowed investors have kept the ball rolling by taking metal out of comparatively higher priced LME approved warehouses to store it in cheaper off market premises. The approx US$ 45-50 per ton reduction in costs sustained the trade through the third quarter but towards the end of last year and early this year it would seem the game was winding up.

Signs of spot market weakness are beginning to show with Japanese physical premiums down 5% quarter on quarter to US$ 122-124/ton according to a World Aluminum review of the second quarter contract negotiations. With the US dollar looking much firmer this year than last there is less of an incentive to invest in metals as a hedge against a falling dollar, not that aluminum was a principal beneficiary of that trade, copper rose on dollar weakness more as a result of its stronger fundamentals. Even Rusal’s announcement this month that they are looking to park 1 million tons of aluminum into a physically backed electronic exchange traded fund can be seen in light of the closing of the long term finance window as an attempt to find ways of maintaining production rates in an over supplied market.

Some analysts now predict an easing of aluminum prices this year, a position we took in our Price Perspectives report in Q1. That would be welcome for consumers but a blow to the nascent recovery in the distributor market which has just been getting accustomed to a few months of gradually rising prices and volumes. A drop now would bring demand from distributors to a halt as buyers up and down the supply chain revert to wait and see.