“The trucks are almost an elegant affectation.

Artist Lawrence Weiner was referring to his and his wife Alice’s three-story house in West Village, New York, which embodies five stainless-steel truck bodies from 18-wheelers in both subtle and not-so-subtle ways. Namely, they compose the large windows of the facade. And while the windows can be overlooked, a closer look confirms their unexpected character: 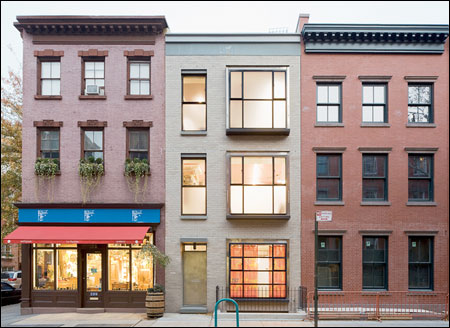 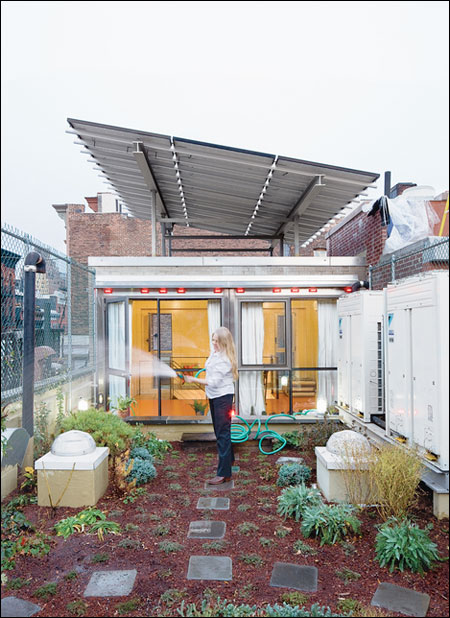 The decisive use of trucks was made by architectural design firm LOT-EK, founded by Ada Tolla and Giuseppe Lignano. They’re known for “container pre-fab evidenced in their Modular Design Unit, a “transportable, scalable house. The firm’s belief in taking advantage of reusable materials demonstrates their goal of “making architecture with existing objects, systems and technologies to be used as raw materials. Truck Body East in Orange County, New Jersey assembled the truck bodies. Extending the truck’s use was the raw material in reflective metal, which distributes the daylight throughout the house.

Though the use of trucks (both inside and out) was approved by the Heritage Commission, it provoked the occasional disapproving reaction from neighbors. Yet this is where the house’s design succeeds. The Weiners expect that their creative and meaningful use of unexpected renovation materials will grow on them. If not, Alice reminds: “This is New York; people shouldn’t expect everybody to want to look like everybody else.

PREVIOUS POST:
Metals From Waste, Lessons From the Past to Shape the Future
NEXT POST:
How About a Bulk Freight Model for the Commercial Airlines?