Tin is not a large market compared to copper or aluminum or indeed most of the other base metals. Nor is it as tied to the major industrial activities such as automotive or construction some 60% goes into solders and for tin plate. It is however, along with copper, the oldest metal traded on the LME with the official contract launch in 1877. With the demise of many western mines, tin is now almost solely mined in Asia and South America. Recently, prices have been on the up, more so than other industrial base metals and so we thought it would be interesting to take a look and see why this often overlooked metal is suddenly becoming so popular.

Prices have risen on the LME by some 20% in the last two months but by less than 10% in China as this graph with data taken from the MetalMiner IndX illustrates: 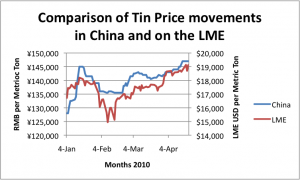 The price increase is not, as with so many other metals, driven by investor demand or ETF’s. In this case it appears to be supply fundamentals doesn’t that restore your faith in markets? Although tin has and does often track copper and other metal prices, this year the tin price has been influenced by falling LME inventories down 18.6% so far this year according to Standard Bank. At the same time, exports from Indonesia, one of the key swing suppliers, have declined since last year due to a combination of falling onshore grades requiring miners to move more into offshore dredging and the monsoon period in Asia disrupting operations in January and February. Exports in February are down 18% on the same month a year ago in stark contrast to every other metal where production is up.

Adding to Indonesia’s woes, the drought in south-western China is raising concerns that producers in the region will not be able to secure sufficient water supplies for the smooth running of the concentration process and that low water levels could impact electricity production needed for smelting. Strangely, Chinese imports have fallen from 5727 tons in Q4 to 1506 tons for the first two months of this year but this probably reflects tight concentrate supplies. The fall in concentrate consumption could explain the draw down on finished inventory taken from the LME. Net refined imports into China are up 54% in February from January and 104% year over year.

All in all tin looks to be supported by some sound fundamentals and even if we were to see a sell off in some of the other metals like aluminum, tin is unlikely to follow.