The Wall Street Journal ran several stories earlier this week with rather rosy titles sure to put a smile on any manufacturer’s face “Consumer Mojo Lifts Profits and “Whirlpool’s Profit Soars as Consumer Demand Increases, to Manufacturers See Rebound. Now I don’t want to rain on this parade but it does remind me of a project I once worked on in which we (the large consulting firm) had identified a multi-million dollar savings opportunity through global strategic sourcing. It’s pointless to relay the facts of the project but suffice it to say that as I spent time with the client and studying the data, there was no way we would secure a multi-million dollar savings. Luckily, I had the ear of the lead partner and suggested (rather strongly) that well, uh guys, the emperor is sort of looking a little naked, if you will.  If we pursue this global sourcing project, we will not generate the savings that we thought we could garner. That story had a happy ending but not because of global sourcing savings. And today, I find myself troubled by some not-so-rosy data that I have tracked these past couple of months which tell me that consumer mojo doesn’t look likely to lift profits nor do we see consumer demand increases. So let me make my case.

A little while ago, we introduced you to the Consumer Metrics Institute. These folks track online internet consumer data. Of course this data has its own innate biases that I won’t review here (they are posted on the Consumer Metrics Institute web site). But what we find intriguing about their data relates to the 17-week lead time they have on national GDP for real consumer demand trends. We’d argue the consumer demand trends remain negative (and continue to drift negative). I love this quote from Rick Davis, founder of the Institute, “Instead of a “call 911 type of event in 2008 or the “hiccup witnessed in 2006, we may be seeing a “walking pneumonia type of contraction that has legs. To illustrate his point, check out this chart: 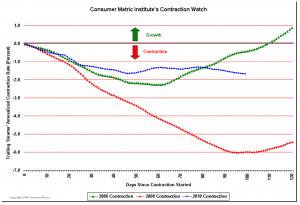 According to Davis, “If that pattern continues to hold, we are currently about halfway through the consumer transactions that will drive the third quarter’s production and GDP. If the blue line shown in the above chart continues drifting laterally over the next 40 days, the 3rd quarter 2010 GDP will look a lot like what we have previously projected for the second quarter 2010 GDP, contracting at a mild but persistent rate. Let’s see what happens when Q1 GDP numbers are released on April 30.

Let’s take a look at a few more consumer trends from the Consumer Metrics Institute. My favorite comparison involves the automotive charts. We presented this first one on April 13: 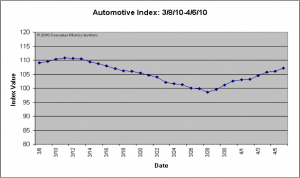 But look at what happened during April: 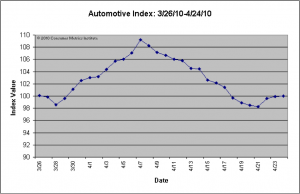 Yikes! Now here is the holy-grail chart by which we can measure the April 30 GDP announcement: 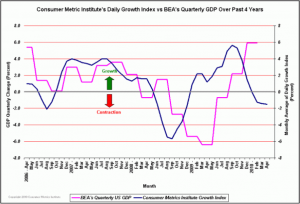 Look, this could turn out wrong come Friday. But if it proves accurate and demand falters, I call Naked Emperor!