Vladimir Putin is moving swiftly to consolidate Russia’s position in Ukraine following the election of a new government this year. The Russian leaning Mr Yanukovych has already agreed that Russia can keep its hugely valuable naval base on the Crimean Peninsula for a further 25 years. In return, Russia is said to have reduced the price at which it sells gas to Ukraine by 30%, said to be worth some US$ 30bn over the life of the contract according to an article in the   NY Times.

Russia is highly dependent on Ukraine to transport its natural gas exports to western Europe. Some 80% of Russia’s gas goes through the transit system of Naftogaz the state distributor. Ukraine and Russia have been at loggerheads in the past because of transit fees and Russia has used gas supply as a weapon to beat the previous west leaning government of Viktor Yushchenko. The reality is Ukraine needs all the dollars it can get. The country has struggled to make the transition from a centrist socialist state to a free market economy. Many organs of state and government operate inefficiently. There is corruption more in business than government but no doubt there too. Although the country has abundant raw materials, some of the best agricultural land in the world and in some areas of science and technology still advanced skills by world standards it was left with a dreadful legacy of under investment by the Soviets. The economy was hit particularly hard by the financial crisis as this graph from data supplied by the CIA shows: 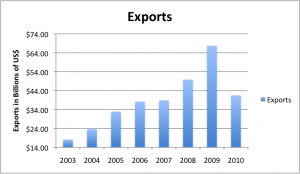 Steel exports plummeted and the cost of servicing Ukraine large foreign debt rose. Currently the country’s gross domestic product is an estimated US$ 81.4 billion. Of which some US$ 34.29 billion was made from exports alone.

Having got his naval base, Prime Minister Putin has now suggested that Ukraine should merge their gas pipeline system with Gazprom, Russia’s much larger oil and gas group in what would amount to a take over of the Ukrainian gas transport system. Russia’s aim is to secure control of gas deliveries to its western markets. But if western buyers are looking on with anxiety at the proposal, some parties in Ukraine are up in arms about the very idea, saying it was tantamount to a large-scale plan to liquidate independent Ukraine.

Russia has long resented the loss of influence and status that the dissolution of the Soviet Union entailed. In previous years it has saber rattled and even invaded minor states in an attempt to maintain its influence, but now it seems to be taking a slightly more subtle and in the long run no doubt more effective line of investment and financial support, buying influence along with assets.