It had to happen. Australia is experiencing a budget deficit and although its extractive industries are making record profits the center-left Labor government of   Kevin Rudd couldn’t resist plugging the gap with a super tax on the miners. The government hopes the new 40 percent tax which will be levied on all mining projects from July 2012 will raise A$12bn in the first two years according to an article in the Telegraph newspaper.

Mr Rudd, quoted in a Times article was defending his plans as a fair redistribution of income from the country’s natural resources, he said, “Resource profits were more than A$80 billion higher over the past decade, but the Australian people received only an additional A$9 billion. BHP is 40% foreign-owned, Rio Tinto is more than 70% foreign-owned. That means these massively increased profits … built on Australian resources are mostly going overseas. It’s time for the Australian people … to get a fairer share of the natural wealth of this country, which ultimately is owned by all Australians.

But representing the industry, Mitch Hooke, chief executive of the Minerals Council of Australia, said, “This is an industry that is clearly paying its way. When you add royalties and company taxes together, it’s about A$25 billion a year and set to grow. As this graph from Credit-Suisse shows, he may have a point: 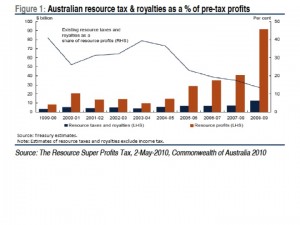 Both BHP Billiton and Rio Tinto lost heavily on the Australian stock exchange and are expected to lose more when the London market opened yesterday. There is already talk about Rio pulling out of the JV with BHP to jointly develop and market iron ore from their adjacent mines in western Australia. But although these two firms are by far the largest, they are not alone among international mining companies with a sizable exposure to the Australian market. Swiss based Xstrata also has sizable Australian investments and many firms such as Macarthur Coal and Fortescue iron ore are totally reliant on the Australian market so all their profits will be hit.

Miners say it will hurt further investment in Australian resource development but the quality of Australia’s reserves, the generally high quality of the infrastructure, proximity to Asian markets and safe political and regulatory regime will continue to make Australia a desirable place to do business.   Complain as they no doubt will, Australian miners will probably seek to recoup the costs from higher prices charged to customers, should the proposal become law.