Last week, I had the opportunity to speak with Wayne Atwell, Managing Director of Casimir Capital. Wayne has toured over 500 mines and mills on six continents. He has over 35 years of experience in the field of investment analysis for Metals and Mining industries. He was selected as one of the ten best buy side stock pickers by Institutional Investor magazine several times and was rated as one of the top analysts in metals and mining by Institutional Investor and Greenwich Associates for more than twenty years. We wanted to hear Wayne’s perspectives on metals markets and in particular if he saw any trends that we may have missed on MetalMiner.

Wayne had a few things to say about copper, “Metals are pretty much ahead of themselves. Sometimes folks think all metal fundamentals are the same but that’s not true. Copper has a steep cost curve but zinc doesn’t.   The zinc cost curve is much flatter all of the producers are pretty much at the same level. China only supplies 22% of its own copper. China is investing all over the world to lock in supply.  In terms of nickel, Wayne suggested that it had the best fundamentals of all of the base metals running a small surplus this year and a deficit next year.

We spent a fair amount of time discussing China. We found two pieces of data in particular quite interesting. The first involves “intensity of use which relates to the amount of metal consumed by an individual (measured on a per capita basis). We have seen an analysis of this before, primarily from the steel industry. But specifically some of Casimir’s research suggested, “China’s share of global metal consumption has risen from 3-5% 25 years ago to 30-40% today. The reasons for that growth all relate to rising living standards and the general urbanization of the Chinese economy. Casimir suggests the intensity of metal use will continue to grow for another ten to fifteen years.

The second piece of data that intrigued us involves China’s share of global consumption and its self-sufficiency ratio. Wayne suggested that some of the run-up in certain metals likely relates to where China lacks commodity self-sufficiency particularly copper, nickel, zinc and aluminum. The chart below from Casimir’s research highlights this in greater detail: 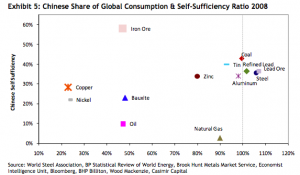 Though we haven’t plotted China’s self-sufficiency in other commodities, Wayne mentioned a couple of additional metals in which China relies upon imports including molybdenum and metallurgical coal.

Finally, we asked Wayne to comment on price trends. He pointed to momentum as an important factor in the psychology of prices, “Eventually, the metals will trade on their fundamentals. In the next month or two we’ll see a correction but we’re in a secular bull market.

PREVIOUS POST:
Glencore Merger With Xstrata Set to Rattle the Order of Miners
NEXT POST:
Ford Driving Ahead with Small Car Fiesta