Platinum and Palladium, Darlings of the Investment Community – Part One

As investment products, platinum and palladium were often in the shadow of the king and queen of the PGM’s gold and silver. But in the last few years, the two metals have reached a much wider investor audience via Electronic Traded Funds, particularly the physically backed ETF’s launched by market leaders like ETF Securities. There is no question that they are a high risk investment whatever their supporters may say, but for the brave at heart the returns (and on occasion the losses) can be substantial. 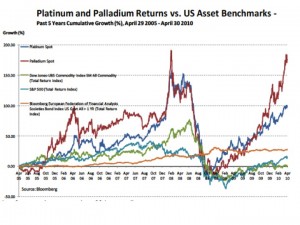 As the graph shows, platinum and palladium have outperformed US equity, bond and commodity benchmarks by between 40 and 200% over the past five years. Although the market plummeted by 71% in 2008/9 according to Johnson Matthey’s latest PGM report covered in a Mineweb article, it has recovered strongly in 2009/10 to not far off its previous peak. According to a recent ETF Securities presentation, platinum and palladium rose respectively by 57% and 118% substantially in 2009 outperforming equities, bonds and the broad commodity benchmarks.   Great news for investors with the foresight to have been long but painful for consumers budgeting on more modest rises from the lows of early 2009.

Arguably the PGM’s are as much a store of value in times of tension as they are an industrial metal, as such their fundamental supply and demand drivers although widely quoted by analysts and investors are only part of the equation when it comes to driving sentiment and hence prices. Having said that, a market in deficit is a market which will expect prices to rise and a market in surplus is a market expecting prices to fall (except for those in the aluminum market of course) so for the sake of our hard pressed platinum and palladium consumers lets consider where these conflicting drivers may push prices going forward?

Physical demand for both metals is driven by broadly similar applications as these graphs with data taken from Johnson Matthey show: 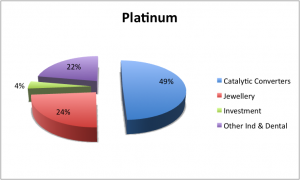 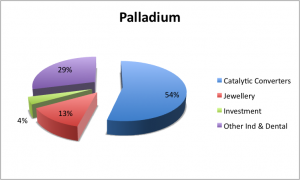 But the way each metal plays out has, in part, been a function of how pricing has encouraged a migration of use from one metal to another and/or how technology has increased the demand for one metal over another for similar applications.

For example auto-catalyst demand for platinum has been impacted by lower automotive build rates in 2008/9 but also partial substitution by palladium as a comparison of these two graphs shows: 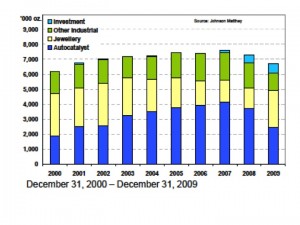 Palladium on the other hand has seen increases in jewelry demand, for auto-catalysts and maintained steady industrial demand as this graph shows: 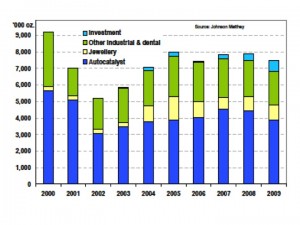 The one trend both metals show is increasing investor demand as illustrated by the pale blue section increasing at the top of each bar in recent years.

In a follow-up post we’ll take a look at platinum and palladium supply markets.

PREVIOUS POST:
Intel In the Line of Fire Over Use of Conflict Minerals Part Three
NEXT POST:
Platinum and Palladium, Darlings of the Investment Community – Part Two