This is the second post in a two part series. You can read the first post here.

But supply is a different matter. Platinum mine production comes from just two sources. 78% comes from southern Africa and 12% from Russia. Average mine production has been falling, on average by 1% per annum over the last five years. The main constraint has been power and labor issues in southern Africa. Increasingly, auto-catalysts recovery has become an important source of supply for both metals but the swing supply issue for palladium has been shipments from Russia. The country has inventory dating back to the days of the cold war and probably added to since. The authorities keep inventory levels a secret and sell at their own discretion onto the world market.   Large shipments of palladium were made from Russia to Switzerland in late 2007 and the second half of 2008, reaching roughly three million ounces.   Johnson Matthey is quoted in a Mineweb article as saying the firm believes that around a million ounces of this metal was priced and sold in 2008 and the same again in 2009; the company also believes that the remainder is scheduled for sale in 2010.   Matthey does not, however, expect that the metal shipped into Switzerland in early 2010, in excess of 320,000 ounces and “apparently from Russian state stocks”, will be sold into the market this year.  Russia is the source for 50% of global palladium supply, followed by South Africa at 35% and North America making up much of the rest. Inevitably a rise in supply from Russia could depress prices but the Russians know that and are unlikely to upset the market to their detriment.

Although palladium supply should increase this year following a resumption of supply from North America, demand is also expected to increase, driven by improved off-take from the auto industry, particularly now that the auto industry’s heavy de-stocking of 2009 is complete.   Johnson Matthey is expecting industrial demand to continue to increase slowly but steadily for the medium term, although the outlook for jewelry demand is somewhat clouded.   On balance, the palladium market is expected to be in oversupply this year, but the surplus is forecast to be smaller than that of 2009. The unknown is Russia.

Increasingly both metals, although heavily influenced by the fundamentals of supply and demand are experiencing a price escalator due to the attentions of ETF’s. At the moment, ETF demand is a small percentage of total demand as we have seen, but it is an increasingly influential percentage. ETF investors appear to be in it for the long term, or so steadily rising fund inflows have suggested so far. 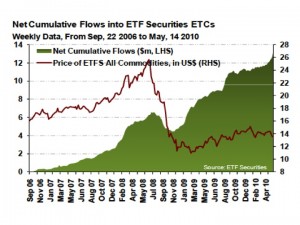 Although these precious metals so spectacularly outperform other forms of investment this will no doubt continue. Monitoring ETF in and out flows therefore becomes one more measure for PGM consumers to monitor if they want to track the level of investor support. Another measure as ETF Securities identified is the correlation between the price of platinum and palladium to emerging market growth as shown by the OECD BRIC Leading Indicator.   So the two variables that will spook ETF investors the most are likely to be automotive build rates and emerging market GDP figures. If either fall back prices may falter, if both fall back expect ETF inflows to follow and with it a major driver of the price.