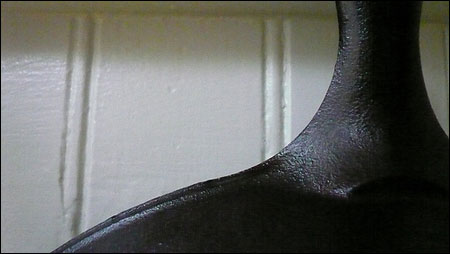 While flipping channels, I chanced upon the show Unwrapped on the Food Network. One of the features was Lodge Cast Iron, a maker of cookware. Founded by Joseph Lodge in 1896, the business remains family-owned and operated. They have been making cast iron cookware for more than 112 years.

Cast iron remains the exemplar of cooking hardware. Kitchens, both off and on the tube, are festooned with the seasoned look of cast iron pans, pots and skillets. Cast iron cookware is known for its excellent heat retention. It’s also known for its longevityâ€with the help of seasoningâ€to keep the surface non-stick and improved with each use.

Cast iron has more than proven its use to cooks of all levels, but it also has another vital property. In a post at the blog “Cooking in Cast Iron, another one of cast iron’s laudable qualities is that it “Creates a Legacy. This shows in the family Lodge’s enduring cookware foundryâ€and this is only one family. Cast iron is not only for serious chefs, it’s for people nurturing next generations, seasoned and lasting like the metal itself.