Home | Commodities | Global Steel Production at Record Levels, But For How Much Longer?

Global Steel Production at Record Levels, But For How Much Longer?

Reuters reported figures last week from the World Steel Association stating that global crude steel production had increased by 31.8% year over year in the first four months of this year over last to 467.8 million tons. So what you say. Last year was one of the worst on record with mills shutting capacity left right and center. And of course you would be right, the bare figures belay the fact that we are coming from a low base in comparing year over year production. But analysts at Credit Suisse estimate that annualized global output rose to 1.48 billion tons, which is a new world record that exceeds the previous high in 2007 of 1.33 billion tons. Emerging markets, not surprisingly, were driving the increase led by China rising 25.4% to 213.9 million tons in the January to April period with output reportedly hitting an all time high of 55.4 million tons in April.

May be more important, capacity utilization rates among steel manufacturers climbed to 83.4% last month, according to the World Steel Association figures quoted in a ThomasNet news article. At the same time, inventory levels, at least in the US, have been falling among distributors and now represent 2.2 months of supply.

But before we start celebrating this resurgence of growth we should be aware that it is coming just as markets are taking fright on a number of fronts. The European sovereign debt crisis is far from over as recent drops on the NYSE have shown. Fears abound that China is going to have to crack down harder on inflationary pressures particularly in the housing market with the possible result that the pendulum will be pushed too far and growth will slow dramatically. Meanwhile mills, at least BOF mills relying on iron ore and coking coal, are under rising cost pressures squeezing margins. We wouldn’t want to suggest for a moment that they are not making money at these levels. Most mills have been cautious about bringing capacity back on stream and hence have been able to pass through the majority of their cost pressures to consumers, at least so far.

But it is fair to say that much of the surge in prices and with it some of the impetus among the supply chain to re-stock ahead of rising prices has come from ongoing Chinese demand for iron ore keeping an upward pressure on the spot price. That may be about to change according to a MarketWatch report on the steel market and the consequences for the iron ore market. Prices for new homes in Shanghai dropped 28% week-over-week at the start of May. While Shenzhen saw a 26% drop, and Beijing prices lost 11% in the four weeks ending at the same period, according to data compiled by Standard Chartered’s China office. Price declines in other major cities have been milder, though the volume of sales are still off by nearly a quarter in “second-tier” cities such as Chongqing, indicating that some buyers and sellers are taking a wait-and-see approach.

“Even given the recent declines, prices have a lot more room to fall,” Standard Chartered analyst Jinny Yanis said in the article.

We have seen how fear of a Chinese slow down coupled with the sovereign debt crisis in Europe has wiped much of this year’s gains off the copper price as this chart from the LME shows. 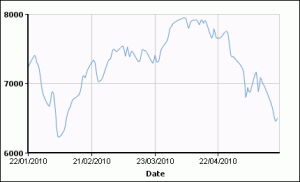 Unless there is a strong bounce back from last week’s flight out of “riskier assets, commodities and emerging market stocks expect next quarter iron ore and coking coal prices to reflect the realization that the super cycle is not a relentless upward curve. We could be in for as pronounced a dip in steel prices as we will soon be seeing in aluminum, stainless and copper alloy semi finished markets.