Here at MetalMiner as many of you are aware, we track dozens of variables that impact metals prices. Two of our favorite research houses include an organization called EcoTrends (that would be economic trends, not ecological trends) and the Consumer Metrics Institute. And as would happen, they each have divergent views as to the state of the economy (EcoTrends being largely supportive of a growing US economy) whereas the Consumer Metrics Institute, well, let’s take a look at what they have to say.

Rick Davis, Founder of the Consumer Metrics Institute made several interesting observations of relevance to metal buying organizations, ” Several things were interesting about the BEA announcement, which seems to have been largely ignored by the equity markets on a day when the Dow Industrials were up over 280 points. Not only was the total growth rate revised downward by .2%, but the impact of inventory building was adjusted upward from 1.57% to 1.64%, meaning that the end growth rate of consumer demand (net of inventory build-ups) dropped from about 1.63% to something closer to 1.36% — a 17% reduction that was hardly worthy of a 28 point rally in the markets. Perhaps the U.S. equity markets should obsess less about Greece and Spain and pay more attention to what is happening with consumers in their own domestic economy. 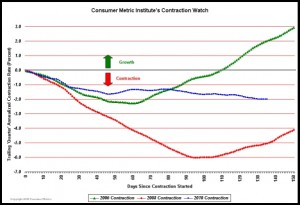 Davis goes on to discuss the above-referenced chart highlighting that though the severity of the current consumer contraction appears much less severe than the contraction of 2008, “it has already lasted longer without forming a clearly defined bottom. We know that if the GDP mirrors consumer activities (as at least 70% of it should, net of inventory adjustments), both the 2nd and 3rd quarters of 2010 should be contracting at a level of between 1% and 2%.

All of you supply chain folks are familiar with the bull-whip effectÂ¦.are we seeing true demand or the result of re-stocking and replenishing? Factory orders eventually decline if the consumer is MIA. What’s your take? Leave a comment!