Earlier this week we introduced you to a domestic anti-trust case involving several of the largest US steel producers. This post seeks to provide some history and context to that case. Without putting you all to sleep, we’ll truncate the 20th century antitrust case history by describing legal cases prior to 1977 and cases thereafter. MetalMiner chatted with Don Hibner an antitrust expert with the law firm, Sheppard, Mullin, Richter  & Hampton to get a better understanding of antitrust cases in general and how the law applies to this case in particular.

From a couple of flooring cases in the 1920’s up until the 1940’s through a series of movie theater cases, the courts took a draconian approach to antitrust with the adoption of Ëœper se rules’. Per se rules were designed to make it easier for courts to do their business and reduce the time involved in hearing antitrust cases. But the rules created a significant downside as well by creating a presumption of guilt captured in the philosophy of, “we know that it has to be illegal.  Per se rules reject the introduction of evidence that would disprove a conspiracy. The warning to producers be careful! As we described in our first post, “A successful claim under Section 1 of the Sherman Act requires proof of three elements: (1) a contract, combination, or conspiracy; (2) a resultant unreasonable restraint on trade in the relevant market; and (3) an accompanying injury. In short, per se rules made it easier for plaintiffs to win cases.

But that changed in 1977 with the Supreme Court rejecting the use of per se rules in the case Continental TV vs. GTE Sylvania. This new ruling created a new standard for trying antitrust cases the rule of reason. This case, along with a second, Twombly made it more difficult for a plaintiff to allege collusion. Twombly held that, unless the allegations of the complaint are in the nature of being plausible and factual enough (for a conspiracy) the judge won’t let it get to a jury. In a trade association case (like the current steel case in which statements were made at multiple venues regarding “industry discipline in terms of output) industry participants including producers can get together and exchange information about historic prices and output as long as the information is used unilaterally to make individual decisions. A new breed of consultants and lawyers came into the picture to provide the new “rules of the road to make recommendations to trade associations and producers to limit (or eliminate) future pricing discussions during trade association meetings. Pricing discussions should relate primarily to historic information only.

Flash forward to the present. In the current case, Standard Iron Works vs. ArcelorMittal, the premise of the case centers on an, “Allegation of discipline that it should not be used to expand output. This case got past Twombly because of the call for discipline and reduction in output in the face of expanding demand for product. Conversely, according to Hibner, this behavior would be construed as inconsistent if demand was increasing. The case covers three specific time periods: mid-2005, late 2006 and mid 2007. We did a little research looking at capacity utilization rates for each of those three time periods. They appear as follows: 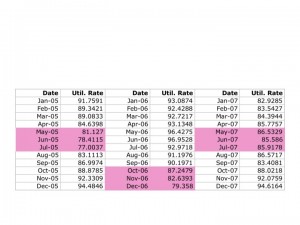 Data Courtesy of the Federal Reserve Board of Governors

The data certainly does not suggest coordinated production cuts (remember, a shift in capacity utilization signifies nothing the plaintiff has to prove a contract, combination or conspiracy on the part of defendants). So summer numbers are down in 2005 (2005 is not the only time we have seen capacity utilization rates fall during the summer months). If you look at the end of 2006, the numbers remain at their new “lower levels through April of 2007 (but that extended time frame was not included in the case). And the numbers from the middle of 2007 don’t even appear “lower than many of the other months. If we were to really analyze this properly, we’d examine the corresponding demand factors for each of those time periods. My hunch tells me that demand data would support the fluctuations.

In a follow-up post, we’ll examine the role of imports and the changed structure of the US steel industry and offer some thoughts on the validity of this case and its impact on metal buying organizations.

PREVIOUS POST:
China's Metal Import/Export Figures Not What They Seem
NEXT POST:
US to Impose Duties on Imported Chinese Aluminum Extrusions