Looking at the zinc market one is reminded of the dynamics of game theory where the actions of one party are influenced by the actions of another. Zinc producers around the world drastically cut production in late 2008/9 as the world fell apart and have gradually brought capacity back on stream as markets have recovered. Driven by rising stock levels, fears of a cooling China economy and the European debt crisis, prices have collapsed in the last two months, yet producers are continuing with capacity restarts.

It is not that they are unaware of the market situation, they are ahead of the rest of us on the global supply balance, stock levels and can project what supply is likely to be in 6 and 12 months along with the best of them. It’s more to do with hoping someone else will close production first and so reduce the over supply position. Prices are fast approaching the cost of production according to a Reuters article so if producers continue to stand on the sidelines they may have their hand forced in a less orderly manner when they start losing money.

The ILZSG says the market will be in over supply this year to the tune of 157,000 tons with projects of up to a 445,000 ton surplus for the year as a whole. On top of which the China market is rumored to have up to 1 million tons of unreported stocks in addition to record highs on the SHFE. Why does China matter? Because as this graph shows taken from ILZSG data, they are the biggest game in town, if demand slows even 5% in China hundreds of thousands of tons of metal is surplus to requirements. 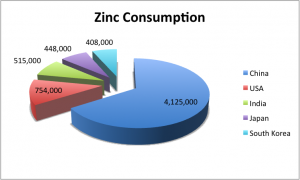 Over half of all Zinc consumed goes into galvanized steel, used widely in the automotive sector but also in construction. Although the automotive industry in Asia remains robust, construction it is feared could be in for a slow down. A combination of falling prices, high stocks and a potentially cooling level of demand is ideal for a significant price correction, which is exactly what we are seeing. The Chinese at least may be biting the bullet while western suppliers look on. It is reported by Standard Bank in a private investors note that Chinese zinc smelters have started cutting production with perhaps 400-500,000 tons of capacity being idled recently.

Nevertheless if western producers don’t join in, the surplus will likely continue and prices could slide further. It is not just a matter of fundamentals; sentiment is also driving down speculative interest, in large part due to worries about sovereign debt contagion in Europe. Some observers are talking of $1300 per ton before enough capacity closures are made and the market finds a floor.