Home | Commodities | Copper – How Much Further Does it Have to Fall?

Copper – How Much Further Does it Have to Fall?

Copper consumers have been watching the falling prices with glee, at least those that have not already covered forward for the year at higher prices. The question everyone is asking though is what’s going to happen next? Are we part way down a longer term price slide or are we at the bottom of a dip and prices are about to bounce back?

Well as you can imagine there are as many opinions as there are observers but let’s take a look at the two options above and try to weigh what the future may have in store.

First, the market rose on a wave of optimism during 2009 when it realized that the world was not going to end and in fact metals demand from China had grown so fast that stagnation in western markets was not the issue it had traditionally been. Copper prices rose 140% according to a Reuters article reprinted in Mineweb this week, along with equities and other commodities. Prices continued to rise strongly in the first quarter of this year as western economies, particularly the US, appeared to be recovering strongly adding to the potential for global demand. The last two to three months however have seen a significant change of heart. The Chinese authorities began what has become a prolonged program of monetary tightening, restricting bank lending and capital reserve requirements as they try to contain what is more widely being seen as a property bubble in China’s coastal cities. Then the markets were rocked by debt worries in Europe led by Greece’s near default and the need for a monumental bailout package. This in itself could have been contained had the package been seen as a lasting solution but a sequence of events started by a realization that Greece almost certainly never will be able to pay back its debts and at some stage will have to reschedule or default, that other Club Med countries are in a similarly perilous state, that Germany the main banker in this farce is far from happy with having to bail out what in reality are largely French and other western bank debtors, and finally this week that worries are spreading to indebted Eastern Europe. The markets are looking at Europe and wondering if the region, home to some 500 million of the richest consumers on the planet, will ever play a leading role in the world economy again. Then to cap it all, US job growth came in at much lower levels than had been expected raising questions about the real strength of America’s recovery, and the possibility of a double dip recession. 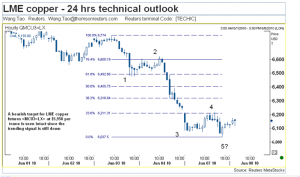 Copper’s prospects have rarely looked quite so bearish as in the last month. Even technical charts are showing a continued downward trend and some analysts are talking of US$ 2.50/lb in the coming weeks, a further 10% fall from current levels.

On the plus side positive financial data is widespread. China is still growing robustly as we reported last week looking at underlying electricity demand continuing to rise strongly. Copper stocks have been falling and although new and previously idled mines are gradually coming back on stream the market could be in deficit next year. In spite of the economic and political issues in Europe, the weak Euro is boosting growth and Germany’s exports are rising at the fastest rate since 1992. Although the rise in employment in the US was not as fast as expected employment did rise and has been doing so steadily for the last six months with April’s figure the largest increase since June 1983.

The fact is the markets rose too far too fast in the second half of 2009 and first quarter of 2010. Euphoria drove a herd mentality that stimulated speculative buying and risk taking. The pendulum has now swung the other way driven by risk aversion and fear. The herd is charging in the opposite direction and will no doubt continue to for some time, bad news is being highlighted and good news is being lost by the thunder of hooves. Copper could indeed break through US$2.50/lb. Much will depend on events and data from China and Europe. Some consumers however are beginning to come back into the market seeing current numbers as attractive. Although there is a lot of uncertainty around there will come a point when it makes sense to cover forward at what could prove to be bargain prices. We are not there yet and may not be until the middle of the summer but before year end we would expect prices to have begun a recovery. The night is always darkest just before the dawn they say. That could prove a suitable metaphor for the copper price this year.