The aluminum market is in a state of balance, or one might say on a knife edge. You may find that a strange statement to make, from a supply-demand point of view the market is clearly not in balance, nor has it been for the last few years. One only has to look at the rising stocks levels or read these columns to know global aluminum stocks are at record levels. Some 4.5 million tons on the visible LME, over a million in western world un-wrought inventory according to the IAI and SHFE stocks at record highs, having risen by nearly 200,000 tons this year alone according to Reuters. New and idled production have continued to come back on stream, first in Asia with capacity in China, India and the Middle East rising, then in Europe particularly from Rusal. See this Reuters note and graph:

We recently wrote about power cost increases in China and the possible impact this could have on China’s metals production in general but aluminum production in particular. In itself, rising power costs wouldn’t have been a major issue for Chinese smelters as prices prevailed during the first quarter but since then prices have fallen by some 25% to below US$1900/ton although they have since recovered slightly to the low $19o0’s today. Even so, a SteelGuru article makes the point that smelters connected to the national grid in China have a cost of production of over US$2000 per ton while integrated smelters may be only $100 per ton under this. That places many of China’s smelters at or even below their cost of production and could force closures this year if the higher power tariffs are maintained as seems likely during peak summer power periods.

Indeed Oleg Deripaska, Rusal’s CEO and largest shareholder made the point in a Financial Times article this week   saying “If the aluminum price is still at this level at the end of the second and third quarters, we will see 2m to 3m tons (of capacity) shut down, all around the world.”   That would represent about 8% of global production, which stood at 37m tons in 2009, but more importantly would be enough to bring the supply demand situation back into balance.

Some would argue it would push the aluminum market into sharp deficit because even though production has been exceeding consumption much of the excess has gone into long term financing deals and in practice physical metal has been in comparatively short supply, as evidenced by the rising spot premiums being paid in Asian markets such as Japan.

This assumes the financing deals continue but recent trends have suggested they are coming to an end. The forward price curve for aluminum has flattened as this graph shows: 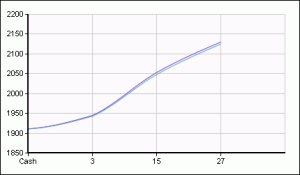 The difference between the 15 month forward price and the spot plus the premium required for physical delivery is only about $100 per ton or 5% which is not enough to cover interest, insurance and warehousing for 15 months. It was $200 per ton or 8-9% last year. So if financing is in decline and production is significantly reduced in H2 2010 the whole supply-demand balance will be different. A lot of metal currently on long term deals will gradually come back to the market as those deals mature but with production down it’s possible this could be absorbed without further price destruction. Does this signal further price falls or a support level for the aluminum price? We suspect aluminum is nearing the bottom but it will be an interesting next few months.