A fascinating car project in the UK, which borrows as much from software development as it does cutting edge automotive design, was covered recently in a Financial Times article. We were so intrigued with the story that we caught up with Nico Sergent from Riversimple for further background on the project.

There are many aspects about the creators Riversimple that are different from other automotive firms, but one fact that is mainstream is 25% of the £2m (US$2.9m) start up money behind the firm is from the Piech family, part owners of Porsche and with a long tradition in the automotive industry. The connection to the software industry comes in the open source design approach Riversimple has adopted, encouraging outside contributions and sharing of ideas and designs.

In a move to break what the team see as a conflict of interest between car builders and their shareholders on one side, the general public in need of transportation on another and the needs of the environment on a third, Riversimple has proposed their new vehicle will be leased rather than sold. The philosophy is this will encourage design for longevity and low running costs rather than low selling price, high running costs and built in obsolescence. It will also make it much easier to manage the closed loop recycling of key components like motors, driver trains and critically the fuel cells which even at end of life are expected to still be worth some £3000 ($4350). So users will pay a set £200 ($290) monthly fee and a mileage rate to include fuel currently set at about £0.15 per mile (US$0.22/mile). At the end of component life fuel cells and drive trains, the firm will replace any and all components as they wear out. Vehicles will be designed for at least a 20-year life during which major components may be swapped out or updated as technology moves on. 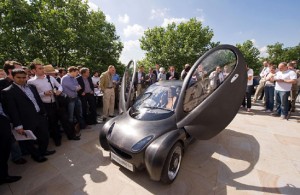 At the moment the prototype demonstrator has been built by the design team many of whom have a motor sport background so the tubular steel suspension and machined aluminum wheels are unlikely to find their way through into the launch vehicle in 2012 but the composite fiber monocque body, fuel cell power unit and ultra capacitor storage systems are integral to the design. The remarkably small 6kw fuel cells are supplied by Horizon and while small and compact would not be sufficient to power the car any distance if not for the ultra capacitors providing a boost for acceleration. The ultra capacitors store energy from highly efficient (five times more efficient than those on the Prius apparently) regenerative braking units. The fuel cells run on hydrogen and by way of platinum catalysts turn the air and hydrogen into electricity, water vapor and low amounts of CO2. So low in fact that the vehicle produces just 3g/km of CO2 when hydrogen is used from renewable sources as planned or 30g/km if natural gas is used. This compares to about 100g/km from the lowest emission economy internal combustion engine car or hybrid.

The electric motors do all of the work and are also the product of cutting edge university research, this time from Oxford University’s spin off Yasa Motors. Although the final motor design is still in development, the prototype is running high density permanent magnets using Neodymium and patented designs to achieve torque ratings twice those of competitors. The team is looking at non Rare Earth magnets but as yet they don’t offer the power to weight and performance parameters.

It should be said a large part of the phenomenal performance is down to the low weight. The car only weighs 350 kgs (770lbs) and has a top speed of only 50 mph but for city driving that is more than sufficient. The sum total is a two seat city car with low running costs, no upfront costs for the user, exceptionally low emissions, mileage of some 240 miles between refueling and constructed of components that can be recycled but also are designed from the outset to be part of a closed loop recycling program from component manufacturer to car assembler through to user and back again. Will this low impact environmentally friendly vehicle prove a model for car-makers in the future? The team behind it certainly hopes so; even if it does not there are many technologies and concepts of car ownership that will be advanced when this project is finally brought to market.