A more graphic illustration of the rise of China’s steel makers would be hard to find than Metal Bulletin’s latest ranking of global steel makers. In an article this week the somewhat delayed list of steel producers is discussed with some explanation of why some have moved up and some have moved down. The full list of top 108 steel producers is available here. The dividing line is drawn at 2 million tons per annum of production. Interestingly some well established almost household names have dropped off the list as they now produce less than 2 million tons. Tokyo Steel of Japan, Acerinox of Spain, Rauterruuki of Finland, Saarstahl of Germany and Vallourec of France are joined by Commercial Metals from the US.

Arguably 2009 was such a horrible and let’s be honest distorted year for steel makers that the new rankings may not be totally representative of a new world order. 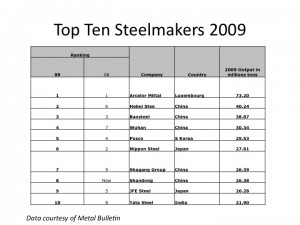 The top ten are as follows and their previous rankings illustrate the extent to which rising demand in China and falling demand in the west have reshaped the order of things.

As demand slowly comes back it could be expected these western mills will reassert their previous dominance in the top tier but unless China goes through a major retrenchment the situation will likely prove to be the same in 2010 and become even more pronounced in 2011. While western world production recovers, China’s production has continued accelerating away. Even if all those in the top ten were to produce no more in 2010 than they produced in 2009 and all those from number 11 downwards were to recover to 2008 levels the only company that would make it back into the top ten would be US Steel, and then it would be to replace Tata at number 10.

Some of the Chinese firms re-positioning has been due to mergers rather than outright capacity expansion. Shandong for example is a whole new steel company. As the article explains the group was only incorporated in March 2008 when Jinan Steel and Laiwu Steel, two major mills in eastern China’s Shandong province, were merged. This is part of China’s long term aim of controlling capacity, environmental standards and market discipline by merging smaller steel makers into larger national champions, and is expected to continue.

MB stated early on in the article that it had been a major challenge to collate the data, which explains why it has taken until nearly the middle of the following year to publish it. While the number one position for ArcelorMittal is not in doubt for some years even following the 30 million ton capacity cut forced on the company by market conditions in 2009, next year is likely to see more Chinese firms in the top ten.