Electricity generators producing power from coal or natural gas in the US are not immune to subsidy that is going into the renewable power sector as can be illustrated by the situation in Europe. The European market is some years ahead of the US in terms of the percentage of electricity generated from renewable sources and therefore may have some interesting lessons for who will be winners and losers in the US in the years ahead.

How long Spain will be able to go on subsidizing wind and solar power remains to be seen if the country is forced to drive through yet more draconian austerity measures but that is a separate issue. Looking back it is clear that the supply of subsidized wind and solar power is driving down the price of base load electricity to below the cost of production. There are a number of factors contributing to this problem. First, at 40% Spain has the highest proportion in Europe of power generated from renewable energy sources such as wind, solar and hydro. 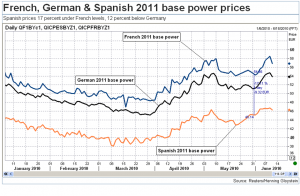 A Reuters article explained that as Spain’s pool market for determining power prices is based on variable, rather than fixed costs, (which for renewables are zero, because wind, water and sunlight come free) an ever increasing contribution from those sources has pushed the price during off peak below the cost of production. Only during peak hours can generators make a profit, driving up peak period power prices to compensate. However Spain’s structural inefficiencies contribute to the problem. The country has very limited large capacity connectivity with France its largest neighbor and so only a small fraction of excess power can be sold abroad.

Germany on the other hand has more wind power production than Spain but at 15% has less renewable power production as a percentage of total electricity generation so the pressures on base prices are not so great. In addition, Germany has excellent inter-connectivity with neighbors and more industrial base-load power demand. Smart grids in Germany also help utilities balance demand and adjust production more efficiently, a lesson for the US that maybe money should be spent on upgrading grid infrastructure before subsidizing renewable power production.

Although lower base power prices are in theory attractive for industrial users only those operating 24 hour round the clock operations can make use of them, creating distorted practices more reminiscent of third world countries that operate power intensive shifts at night to access lower power costs.

France on the other hand generates some 75% of its electricity from nuclear and 15% from hydro resulting in relatively low base and peak load operating costs and by European standards high profit margins for generating companies. One reason maybe why the French have been slow to invest in renewable energy projects such as wind or solar, preferring to focus on nuclear, hydro and even tidal power to maintain a low carbon footprint.