The zinc market has taken a heck of a beating recently as this graph from the LME shows. The price has fallen some 30% from its highs and along with lead has been one of the worst performers on the LME. 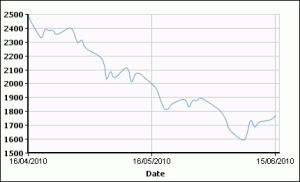 While all metals have been hit by a combination of fears over the global recovery, particularly that China could be slowing, and fears over sovereign debt, particularly in Europe, zinc has experienced added pressure by rising stocks starkly underlining that the market is in surplus. Recent data from the ILZSG reported in a Reuters article shows that the market continues to produce more than it consumes. Refined production was 4,121,000 whereas refined consumption was just 3,941,000 a surplus of 180,000. This on top of a surplus last year pushed western producer stocks up to nearly a million tons. We wrote earlier this month on the game of chicken going on among producers hoping someone else will close capacity first but for the time being producers seem happy to let stocks rise and make their crust. So it was interesting to see the Reuters article focus later in this decade and consider what the consequences could be of expected mine closures and planned new mine openings.

Several major mines in Australia, Canada and Ireland amounting to some one million tons of production are due to be exhausted by the middle of this decade. Counterbalancing this are new mines coming on stream in Australia, Iran, Greenland and Russia plus some major works to extend existing facilities in Peru and the US which could add at least as much or more. In the meantime there is a huge stock overhang that can meet any shortfall. Pessimists are pointing at rising demand and forecasting a shortage of metal in 2-4 years time driving up prices. The optimists are saying the stock overhang will carry the global market through any possible shortfalls and keep a cap on prices. We have seen both price rises and stock rises in tandem at periods over the last few years proving that it is possible for investors to ignore high stocks and still bid up prices. As an interesting article in the Financial Times this week looks at equity markets and summarizes the three kinds of investments that are made in shares, broadly broken down as follows:

Arbitrage or relative value strategies exploit pricing inefficiencies in an asset class or in metals between markets such as London and Shanghai, etc., ensuring markets provide clear pricing signals and function in unity, rather than as unlinked markets for each individual asset.

Finally, fundamental or value strategies involve buying assets to earn the economic value created. By taking capital from less profitable companies and channeling it to more profitable ones, this strategy most famously characterized by the likes of Warren Buffet gives the market its predictive ability.

This third form is largely missing from metals markets, because metals pay no dividend stocks and are rarely held for periods of time beyond a few months. Speculators can buy far forward warrants but the market becomes less liquid after about 12-18 months forward. 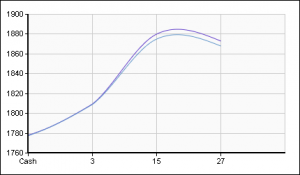 In addition, the forward price curve for zinc due to the contango is $100/ton higher than spot further dissuading buying forward. So with metals markets driven more by the first and second strategies short term speculation and arbitrage perceived shortages in the middle of the decade are unlikely to influence the markets now. But for buyers of equities the shares of well positioned mining companies could be a different story.