Crude Steel Production Up 29.1% From Last May 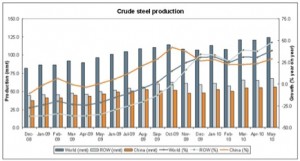 Asia reports have China showing an increase of 20.9% compared to May 2009, Japan showing an increase of 50.2%, and South Korea showing an increase of 28%. The EU, US, and Brazil are also showing significant increases as well. The article goes on to say “However, while China, South Korea and Turkey showed increased crude steel production in May 2010 compared to the same month in 2007 [Editor’s Note: pre-recession], the US, Italy, Spain and Japan are not yet back to pre-crisis production levels. The EU is -18%, North America -14% and Latin America -9.8% down on the five months to May total in  2007. Furthermore, capacity utilization rates are slightly down from last month.

“The London Metal Exchange (LME) today announced its intention to list New Orleans as the first US delivery location for steel billet, bringing the benefits of price transparency and risk management to the long steel industry in the US for the first time, according to a press release.

LME Chief Executive Martin Abbit extols the benefits of the new arrangement by saying that due to the addition, “The US steel industry suppliers, mills, merchants and end users — can now manage their risk as effectively as counterparts abroad. We expect trading volumes in the LME steel billet to continue growing as companies globally use our contract to manage their cash flow and inventories, lock in margins and deal with price volatility.

The LME plans to formally merge existing regional futures contracts for steel billet in the Mediterranean and Far East to create a single global offering for steel billet, and this new North American point is central in their doing so.

According to Nucor, Demand is Slowing

The debate about where the economy will meander in the future has many people frustrated with all predictions and therefore simply sitting around to wait and see what happens.

Nucor Steel, who forecasts based on its customer orders, predicts a bit of a slump in steel demand according to CEO Dan DiMicco. “Construction is still bouncing off the bottom,” he said, citing a more than 10 percent decline in May U.S. housing starts and a record 32.7 percent decline in May home sales to their lowest level in four decades. “Nucor is currently operating at a 75 percent rate that, at best, may inch up during the rest of the year he cites, also saying “it all depends on what happens in the economy. Smaller customers are unable to get the credit needed to maintain inventory, and DiMicco is calling on the federal government to release more stimulus money for infrastructure building — but Nucor is still operating in recession conditions.

“The worst is over in the steel industry ???

United States Steel Corp “thinks the worst of the steel industry’s downturn is over, but sees the high cost of raw materials used to produce the metal as having an inhibiting impact on profitability.

Here in North America we have an advantage, according to Chief Executive Officer John Surma — “Roughly, 70 cents of every steel-making dollar today goes into the purchase of raw materials and energy,” he added, noting that iron ore and metallurgical coal costs, the raw materials used to make steel, continue to rise. As a result, he said, the advantage in the current market goes to steel producers integrated with iron ore or metallurgical coal mines, pointing to North American steel producers as having more balanced resources than either Asian or European steel producers. In North America, Surma said, U.S. Steel owns a large portion of its raw materials supply. Whereas, in Europe, it contracts for both iron ore and coal.

So apparently, then, the market is only on the upswing for producers who have their own raw materials to draw from.

Though “U.S. Steel thinks the industry comeback is just beginning to develop, in line with early stages of recovery in the United States and global economies, you have to consider that statement in light of Nucor’s comments on the economic recovery.