We (and I should qualify that to say I) have been suggesting a double dip recession officially since March 22 of this year when we first introduced MetalMiner readers to the Consumer Metrics Institute. And though it appears as though I have eaten some crow when Q1 GDP numbers first came out at a 3.2% growth rate, the continual downward revisions of those numbers (from 3.2% to 3.0% in early May to the latest revision to 2.7% on June 25) now puts the Consumer Metrics Institute and our reading of their numbers squarely in the realm of accurate! 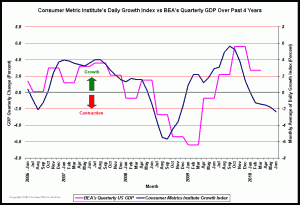 “Because the Consumer Metrics Institute’s Daily Growth Index only lags the real-time consumer economy by several days and has a day-by-day time resolution, the Daily Growth Index can also tell us something totally missing in the BEA report: that the newly revised GDP ‘freeze frame’ picture captures a moment in time when consumer demand was dropping at a rate of about .08% per day. This means that the difference between the revised GDP and our original projection represents only a single day of economic change. But more importantly, our Daily Growth Index shows the dynamics of the economy at the point in time when the BEA ‘still picture’ was taken.

This certainly tells us where we have been but like most of you, the multi-million dollar question is this: where are things going? Since I feel as though the Consumer Metrics Institute (and our support of their conclusions) has been at least partially vindicated, MetalMiner readers might like to review the Institute’s predictions for the balance of 2010Â¦.

Davis believes the Q4 GDP revised numbers reflect his index reading of November 30th, 2009. If we look at the chart above, we can see that the main consumer spending index moved into contraction territory on January 15, 2010. What does this mean for GDP data going forward? As Davis suggests, the blue line in the chart below remains in contraction and seems to just hang, not forming a clear bottom so necessary to predicting a turning point. Davis also points out to key factors when looking at contraction lines severity and duration. Clearly we’ve seen more “severity recall 2008/2009 but we haven’t seen this “duration as of July 1, the line remains well in contraction territory. It’s that second element that should raise warning flags. With no sign of an improvement, a protracted contracting consumer market does not bode well for the overall economy. 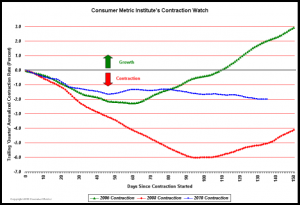 Davis has a great write-up on his site about the latest data where we have echoed many of his points. He also mentions something that has key ramifications to US manufacturing and metals markets in particular. This involves the inventory component. Within the newly adjusted 2.7% GDP number, Davis notes that the inventory piece moved up from 1.65% to 1.88% – meaning that the bulk of GDP, 66% really came from inventory swings and not consumer demand. See this earlier blog post we ran on some inventory numbers coming from Steel Market Update for additional insight.

Now we ask ourselves the next question, if much of Q1 growth, two thirds fully to be exact came from inventory swings (or just plain re-stocking etc), what will the next two GDP announcements look like? July 30 will give the world a view on the advance Q2 GDP numbers and we’ll see Q3 numbers out just before the mid term elections. Will someone kindly explain to me how we expect GDP numbers to remain positive when the consumer trend line is clearly in contraction mode?