Well not quite that simple. Normal monsoons this year auger well for the Indian agricultural sector and as a result are bullish for silver consumption in a country that can import up to 4,000 tons in a good year – so potentially a major consumer. As photographic use has declined and industrial use has recovered only gradually, use in jewelry and as an investment has grown. In India, high gold prices have encouraged a switch to silver by the farming community as a form of asset accumulation and store of value. 60% of consumption for this purpose comes from this sector of Indian society alone. 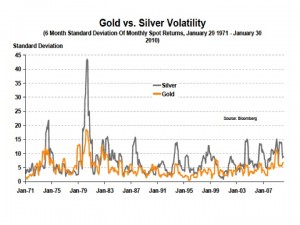 Historically, silver returns tend to be more volatile than gold as this chart illustrates. Probably because 50% of silver is consumed in industrial applications, price volatility is closer to base metals than precious. As gold prices rise, typically silver prices rise faster and as gold prices fall, silver prices fall faster. The volatility in price is exacerbated by the rising consumption of silver in ETF’s particularly metal backed silver-only ETF’s that have only really developed in the last few years. 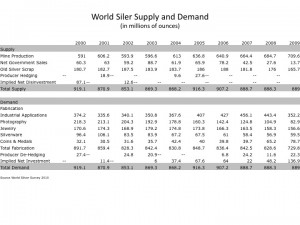 While supply from mines has increased in recent years, supply from government stockpiles and scrap recycling has decreased, reducing supply sources. At the same time as this table shows, demand for coins and as a vehicle for investment has increased. Although industrial consumption dropped in crisis hit 2009 it is coming back now and with rising Indian jewelry consumption suggests the current strong price levels may not be misplaced.

A WSJ article reports Indian demand could jump on the back of good monsoon rains from current 2.5-3.0 tons per day to 25-30 tons. Prices are at near record highs on the Mumbai market and are widely expected to see a short term correction but if they do that will just spur demand as buyers seek to secure a deal to paper reports local sources as saying.

GFMS, the world’s leading precious metals consultancy, says in its Silver Survey 2010, that even while silver broadly shadows gold, chances are that this year it will outperform the yellow metal. GFMS thinks there could be a more decisive silver price breakout before the year ends to take it past the London high of $20.98 an ounce set in 2008.