Home | Commodities | Charts Pointing to a Fall in Metals Prices

Charts Pointing to a Fall in Metals Prices

For the vast majority of metals buyers, the analysis of chartists or technical analysts are so much black magic, unfathomable and therefore largely ignored. For many (although not all) professional investors though the technical analysts charts provide an important supplementary source of advice, for a few they are the sole basis of investment decisions. Empirical evidence as to the accuracy of chart predictions is difficult to come by. Wikipedia assuming you set store by its statements says that of 95 modern studies, 56 concluded that technical analysis had positive results. The technique has been around for hundreds of years, starting at least in 17th century Dutch trading markets, if not before. The basic premise is that investors collectively repeat the behavior of the investors that preceded them. As such price curves follow predictable shapes based on the sum total of many individual investor choices.

Whether technical analysis actually works however remains a matter of controversy. Warren Buffett famously said, “I realized technical analysis didn’t work when I turned the charts upside down and didn’t get a different answer” and “If past history was all there was to the game, the richest people would be librarians.”

OK flippancy aside while the ability of charts to predict the future can be debated, it does seems they can be good at identifying trends and a lot of investors over the years have made a lot of money by following the simple mantra a trend is your friend. In addition if enough decision makers follow chart trends and make similar decisions based on those charts the results will not surprisingly become self-fulfilling. So we thought a recent analysts summary published (with all the usual caveats) by Reuters was worthy of a review to see what the charts are suggesting for H2, 2010. 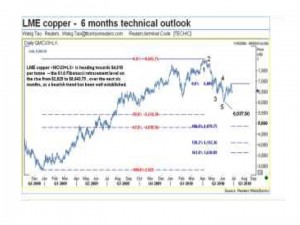 First, copper is heading towards US$4,818 per metric ton according to the analysis. Providing prices in the short term do not breach $6,885 on the upside (in which case the curve shape change and hence the prediction) the analysis is suggesting copper is on a bearish trend and is heading below $5,000 over the next six months. 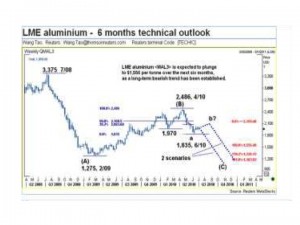 Looking purely at the technical trends, aluminum is expected to fall to US$1,556 per metric ton over the next six months. The rally from last year’s low of $1,275 is viewed as nothing more than a rebound within a long term bearish trend and the metal could test this level again. 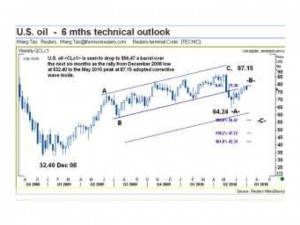 There are several wave theories. Some practioners of technical analysis hold to one or two, other hold to different theories, most consider nearly all of them and look for correlation between the different results. According to pattern theory and wave theory, gold is expected to peak at US$1,300 per ounce before starting a bearish downward trend. When gold breaks below $1,180 it is expected to establish a long term downward trend driving the price down to $680 over the next six months. 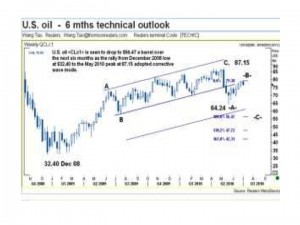 Last, oil is seen dropping below US$57 per barrel over the next six months with the possibility of a fall to $42 under certain circumstances.

Whether these predictions come to pass will be very interesting to see – we would be staggered if they did but never say never. Although in not quite six months time, MetalMiner will again write in late December to report on how accurate the technical analysis has proved to be. Let’s hope for anyone sitting on significant resting orders or long positions the chartists have got it wrong!