All eyes are on China it seems. Certainly for the metals markets the health of the Chinese economy and likely Chinese demand are high on the agenda for buyers trying to gauge where prices are going in coming months. The steel market is no different, although the US is not as reliant on the spot iron ore market as consumers in Europe and Asia. China’s exports of steel products have almost as profound an impact on the finished steel market as their purchases of iron ore do on the raw material costs for the industry. Either way you look at it, China matters.

So a recent report by Credit Suisse deserves more than a casual glance coming as it does from one of the originators and largest players in the iron ore swaps market. Credit Suisse has a significant role in setting price and risk management for the seaborne iron ore market and knowledge in depth as to what drives demand and price. Whether you agree with all their findings or not the analysis is interesting.

Not surprisingly the bank is anxious about what they term China’s “negative growth first half 2010 macro and micro policy adjustments which are only just beginning to be felt and will certainly feed through into the second half of the year. Specifically they highlight the following:

In addition there is the possibility of an interest rate increase to curb wage and food inflation, and a tail off in the 2008/9 local government spending which has now peaked.

On the plus side the government has recently announced: 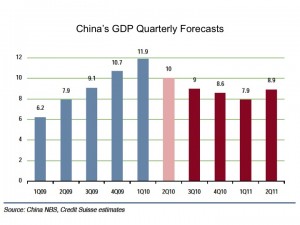 Balancing these various drivers the bank has drawn up a projection for likely growth which shows a welcome drop from the breakneck growth of Q4, 2009 and Q1, 2010 to a more sustainable sub 10% level through to the second half of next year.

If they are correct then iron ore demand should hold up reasonably well and steel prices will be set more by the ability of the mills to manage supply than the risk of a collapse or surge in demand. So far the mills have managed steel inventories relatively well, but stockpiles have still increased up to 10.4 days of cover, still below March’s 11.17 days but the mills will need to reduce production further to prevent this from rising more. Steel mill production has fallen this year. The bank estimates by 4 million tons/month during June, largely due to earlier over production forcing up inventory levels. This has resulted in sharp cut backs in iron ore which have driven down prices. Fortunately for the mills, margins have held up well as a result as iron ore prices tumbled. If steel demand picks up as expected after the summer slow down then iron ore prices could rally again in the latter part of the year.

The most important developments observers should watch in the bank’s opinion are, on the upside Chinese construction industry activity once the seasonal monsoons over southern China abate, and on the negative side the extent of infrastructure spending cuts. The bank feels residential property is actually quite robust with housing supply more limited than the 2008 peaks and western regions in particular receiving a lot of government support. A fall in eastern tier one city prices may actually increase overall demand as it brings affordability within reach of more potential buyers. More of a risk in the bank’s opinion is a reduction in the level of lending to provinces, municipalities and counties through shell companies, known as Urban Development Investment Corporations. These were a major conduit for investment in and source of construction lead growth in 2009, amounting to some $450 billion according to this article. New restrictions by Beijing could reign in this source of funding and probably represents the greatest potential risk to continued strong steel demand in China.

On balance though the bank is relatively bullish on both steady GDP growth sub 10% per year and on iron ore demand on the basis of solid if no longer spectacular steel production growth.

PREVIOUS POST:
The Acid-Rain Market Has Failed Why We Should Be Afraid of Proposed Carbon Legislation
NEXT POST:
Like South Korea and Japan Before Them, China Manufacturers Break Into the Big Leagues