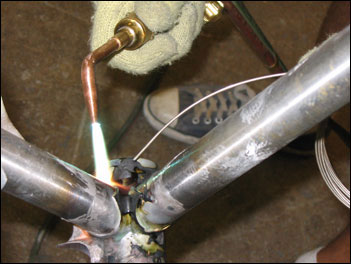 Industrial Designer and Welder Tom Schoeniger’s San Francisco-based studio 4130 is to “create the finest bicycles possible, period. The “CafÃƒÂ© Racer was designed for Illustrator and Clothing Designer Mike Giant, who lived in Amsterdam where more than half of transportation is done by bike and where bike paths connect most of the city. Giant wanted his bicycle to reflect this utility seen with the city’s bicyclists: 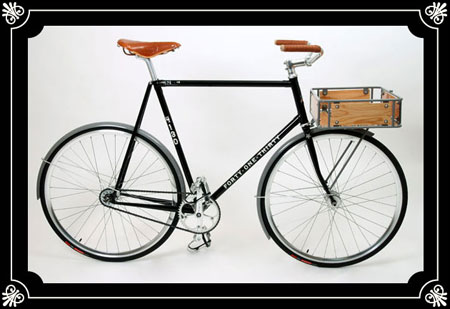 The “Blue Boy is Schoeniger’s “traditional take on a fixed gear bike. Its color is from an electric guitar made by manufacturer Rickenbacker. This design is both beautiful and electric: 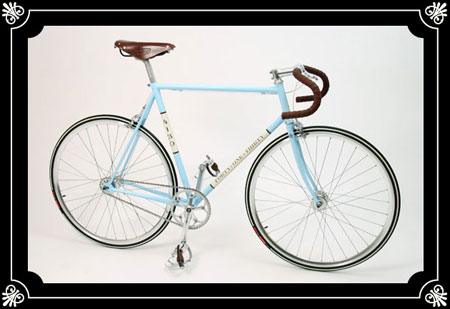 “Finest raw material in Steel
Schoeniger makes clear his loyalty to steel as the best material for crafting bicycles:

“Steel is without any question the most elegant material for the fabrication of bicycles, period. There are many materials used to build bicycles today and each one has its champion but the only one that continues to improve dramatically in material quality, and has the potential to last for almost limitless years, is good old fashioned steel.

Schoeniger’s stand on steel is about making a lasting product. To him, bicycles made of aluminum tubing or carbon fiber weaken over time and become disposable.

Working with steel is a part of Schoeniger’s passion to realize a bicycle that fits the rider in every respect. He expressed why a custom-made approach achieves the kind of structural integrity which closely matches that of its rider:

“Each dimension of your body is measured and used to calculate tube lengths which drive the dimensions of the frame’s triangles, so each person’s unique body proportions create a unique frame design. Production bikes are built using averages of these dimensions, so the frames really fit no one body perfect, but many bodies poorly. Â¦

Each bicycle I build is both a very precisely fabricated machine, but also a rolling sculpture. I take great pride in the quality of craftsmanship I use for all aspects of a bike’s fabrication, from selecting the tubing and lugs, to the labor intensive painting process to the details of the final assembly and polishing.

Steel is also in the name of Schoeniger’s company. 4130 is the code of the American Iron & Steel Institute: 41 denotes a low alloy steel containing nominally 1% chromium and 0.2% percent molybdenum; 30 is the carbon content of 30% 0.3%.

Soul in the machine
Schoeniger’s pouring of his attitude, education and building experience into his work, leading to its rolling result, is the only way to make something good. His business of building custom bicycles and building a brand around them not only supports bicycle culture but also a culture of meaning in every detail. All done in keeping with what pioneering Designers Ray and Charles Eames said: “The details are not the details. They make the design.

Read related post Cycling with the Urban Woman in Mind.