Racing gave us no end of innovations in the automotive world. Arguably four-wheel drive became common place on road going cars only after Audi’s total domination of the world rally championships with the Quattro in the early 1980’s.   Turbochargers and fuel injection moved leaps and bounds following their early adoption in Grand Prix racing. The list goes on especially among enthusiasts who could bore you for hours with lists of technologies that were too rudimentary, unreliable or expensive prior to refinement by racing engineers.

Little has been seen so far about racing electric cars, but maybe the nascent industry would benefit from the innovation stimulated by racing competition.   Intriguingly regenerative braking is already making its way back into race-cars having been brought to the mainstream by the electric car industry. In theory, electric cars have a lot to commend them for the race track, the electric engine delivers constant torque so unlike an internal combustion engine that peaks at certain revs the electric motor continues to its limit. It also doesn’t use gears potentially saving that split second of change time. The near silent engine sound though will never be a match for a Ferrari at full song!

In an article this week, the Telegraph newspaper covered a development project being run by BMW who look keen to start a class of electric car racing with their Mini brand. The concept car is still in the experimental stage and the performance figures are not exactly exciting top speed 116 mph and 0-62 mph in 8.5 sec, but pace will come with further development. Currently the biggest hurdle is keeping the 5088 Li-ion cells cool, with air cooling they last about 4 circuits before over heating. A recent world record setting (for an electric car) first sub 10 minute lap of the legendary German NÃƒÂ¼rburgring circuit was only achieved by freezing the whole car for 2 days down to 9 degrees C.

Not all competition has to be on a classic race circuit. The world’s fastest electric car left Prudhoe Bay, Alaska, on July 4 bound for Argentina on a 26,000-kilometer trip to generate some excitement about electric cars. 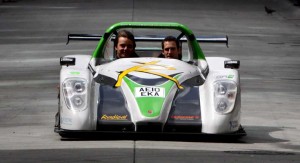 The 400-horsepower vehicle can reach speeds of up to 200 km/h and will go more than 400 kilometers on one charge, but takes eight hours to recharge from completely empty. The development team from Imperial College London will use the experience to develop longevity and reliability in the technologies used.

But the big advances tend to come when the big money gets involved so it’s encouraging to see Audi back at the technological cutting edge with their diesel powered Le Mans racers stomping over the competition again this year. Following recent changes to the regulations teams are being permitted (encouraged?) to develop hybrid technologies such as regenerative braking and combined diesel-electric and petrol-electric hybrids. Both Peugeot and Audi, who have traded honors at Le Mans over recent years, have announced the intention to race hybrid cars not only improving the image from something an environmentally responsive geek would drive to a cool performance technology, but more importantly driving innovation in a technology that is in desperate need of advancement to make it economically attractive to a wider buying audience.

PREVIOUS POST:
The National Grid at Risk
NEXT POST:
Ferrochrome Prices Expected to Shrug Off Q3 Dip and Remain Strong Next Year