Home | Commodities | Is it Time for a Uranium ETF?

Is it Time for a Uranium ETF?

That sounds like a strange question to pose when you consider the uranium price has dropped from $136/lb in 2007 to $46/lb today. Back around the year 2000, uranium was trading at $10/lb, when nuclear power was out of favor and power from other sources was cheap. But a gradual resurgence on the back of nuclear build programs developing in Asia and a prolonged commodities bull market saw uranium prices rise along with all other metals. 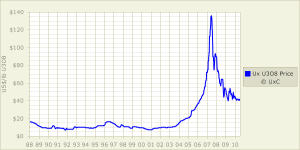 Since 2007 the price collapsed but unlike other exchange traded metals it has not recovered again as this chart from industry consultants UXC shows.

In a recent article in the Telegraph, Garry White explains this could all be about to change. The Chinese are rumored to be stockpiling uranium oxide U308 buying 5,000 tons this year against a current consumption requirement of just 2,875 tons to keep its 11 reactors supplied with fuel. According to the WNA the country currently has 24 reactors under construction and predicts that China could have built up to 200 reactors by 2030. UXC is more conservative, at least on the time-scale as the following graph shows:

China, as with so much of the world’s metals consumption, is the key. UXC estimates the country expects to develop as follows:

It is not an exaggeration (although it may be unfortunate phrasing) to say the world is going through something of a reactor building boom. A total of 59 reactors are under construction around the world. Russia is currently building 10 reactors; South Korea is building six; and India four, according to WNA data quoted by the Telegraph. The other reactors are under construction in the US, Slovakia, Argentina, Finland, France and Japan.

Analysts expect the uranium price to jump by one third next year, which will be its largest gain since the euphoria of 2006. The general expectation is the price could hit $55/lb next year although strong as rising demand looks, estimated to be +46% over the next decade, the upside is limited by even faster rising supply. As the price rose inexorably towards $136/lb in the mid decade, new mines were planned that are only now coming on stream like BHP’s massive Olympic Dam in Australia and Cameco’s Cigar Lake in the US, which has been closed for 3 years following flooding.

Nevertheless demand does look robust and the apparent stockpiling by the Chinese should be seen against the backdrop of long-term rising global demand. Although there is no exchange traded futures market for uranium the forward price for the metal is $60/lb and the limited uranium only investment plays such as Denison Mines’ investment holding company, The Uranium Participation Corporation, listed in Toronto, which invests all of its assets in uranium, in the form of uranium oxide or uranium hexafluoride, UF6 and hold them in vaults in the expectation of price rises appears the closest one can get to a non exchange traded kind of paper investment vehicle.

PREVIOUS POST:
Clever New Lithium ETF, but is it Green?
NEXT POST:
Yet More Reports of Chinese Lead Poisoning