There are now so many fake £1 ($1.55) coins in circulation the Royal Mint in Britain could be forced to scrap all of the coins and reissue the entire denomination was the shock opening paragraph in a Telegraph article this week. It is not the first time this issue has been raised.   Experts have become increasingly worried that consumer confidence could become undermined in the coins following reports over the last few years that the percentage of fake coins in circulation has progressively increased. In 2002, one in 100 £1 coins was a worthless fake and in 2007 the figure was one in 50, today it is one in 36. Even that official estimate could be out. Andy Brown, managing director at Willings, a company which tests coins collected at car parks and in vending machines, said the machines used by the Royal Mint to test for fakes were not accurate enough. He is quoted by the Telegraph as saying the figure could be closer to 5%, meaning one in 20 coins are fake.

Here are images of two coins, can you tell which is the fake? 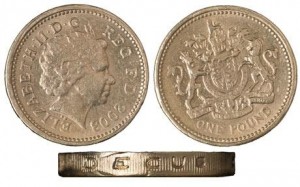 Our thanks to PjrStudio/Alamy for permission to replicate these images 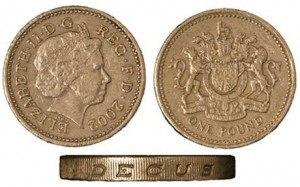 Even though the value of the metal content is small compared to the face value of the coin, the one pound coin is minted from a nickel-brass alloy of approximately 70% copper, 24.5% zinc, and 5.5% nickel according to Wikipedia making the metal cost about 8p (or $0.12) the cost of re-melting and minting some 41m coins would be considerable. At this level of counterfeit though it may become a necessity. Other countries have been forced down that route. The 5 Rand coin in 2004 was re-issued when taxi drivers and shopkeepers in South Africa refused to accept them in South Africa the number of fakes was just 2% of those in circulation.

Anyone wanting to cheat the parking machines meter only has to lay their hands on a few Swazi lilangeni, minted from the same planchets as the British pound coin, and hence the Swaziland coin has the same chemical constitution, diameter, and mass. The lilangeni is only worth 11 to the pound at current exchange rates giving the user a handsome (if illegal) profit.

Another aspect of this is that British citizens are committing crimes every day they unwittingly use a fake coin. The real losers though are the shopkeepers who are not refunded by banks if they deposit fake coins from their tills. The British on the whole though seem largely unperturbed by the possibility one in 20 coins in their pocket could be worthless.   Perhaps after 12 years of socialist New Labour government they have become resigned to the fact their economy is in tatters and the currency is practically worthless anyway.

Spoiler Alert: the first is the fake and the second is a real Royal Mint coin. The edge detail on the first is not as clean and distinct as the real coin, and some fakes have the queens head on one side orientated out of alignment from the image on the reverse.