Home | Commodities | Copper, Where to Next?

Copper, Where to Next?

The copper market has moved from being in surplus last year to being broadly neutral this year and likely will back in surplus in 2011/12 according to HSBC Bank in a quarterly review. Miners are keeping the market for concentrates relatively tight but there is a surplus of refining capacity with Chinese and Indian refiners setting the pace for historically low treatment charges. Recent Japanese smelter mid term fee agreements fell a further 16% to under $40 per ton from the level set in the annual round last January of $46.50 per ton.   Ultimately this will be to the detriment of the industry as many smelters are at or below break-even and closure will concentrate bargaining power in the hands of the Chinese and Indian smelters that remain according to a Reuters article. 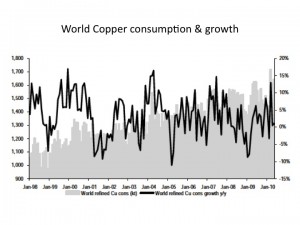 As the graphs above and below show, courtesy of Credit Suisse, if it were not for China, global copper demand would have fared as poorly as many other metals but nearly all the demand growth has come from that country. 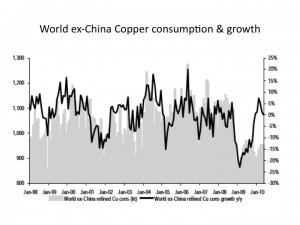 Copper demand has recovered faster than in previous recessions such as 1973, ’79, ’89, and 2000 when demand took anything from 2 to 5+ years to recover. This recession was different though in that the largest consumer Asia barely had a recession and engaged in massive restocking while other consumers in the west were retracting. Although the State Reserve Bureau’s 600,000+ ton stockpiling during H1 2009 hasn’t been repeated in 2010 it stopped the market from going into serious surplus and along with the massive stimulus program that followed close on its heals has kept global copper consumption humming.

The question remains however is to what extent Chinese demand will continue to drive global demand for copper. A slowing China may see a slowing copper demand although few seem to think so, aided by a weaker dollar and falling inventories the copper price has been rising this last week or so. We suspect it will continue to trade in a wide range with a high degree of volatility over coming months. There is something of a floor at US$ 5,500 per ton supported by the expectation that the SRB will step back in if prices fall that low. But at the top end, demand is not strong enough to reach back up to $8,500+, in broad terms we feel the current level of $7100 per ton doesn’t have a lot of steam left in it and we could see the price back to $6,500 by the end of Q1 next year.