Consumer Confidence Down Company Profits Up-?

For any of you reading the financial pages and feeling a sense of disconnect you are in good company. On the one hand we read of plunging consumer confidence in the US and Europe, the fear of double dip and slowing (albeit self induced slowing) growth in Asia. In addition some previously highly correlative predictive models such as those produced by Consumer Metrics Institute are clearly pointing to a contraction later in the third quarter see following chart: 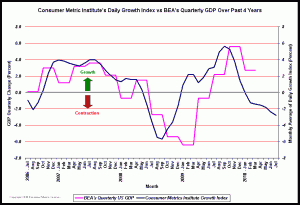 As the chart shows there is a solid correlation between the Consumer Metrics Institute’s 91-day ‘Trailing Quarter’ Growth Index curve and subsequent GDP growth rates over the past 4 years.

Yet at the same time the financial pages are full of second quarter financial reports from major industrial concerns trumpeting excellent financial results. Industrial manufacturers are largely in the rudest of good health, with reduced cost bases after payroll reduction in 2009 and re-focusing on core strengths. Profits are high, borrowings are low or at least low cost and so are forward order books.

A Financial Times article covers a broad swath of industries including heavy machinery Caterpillar and Komatsu, aircraft Boeing and in the Telegraph newspaper coverage of Rolls Royce, ABB and Siemens while the WSJ recently reported that Volkswagen’s profits greatly exceeded expectations and net liquidity stood at a ridiculous Euro 17.5bn ($22.75bn). A Telegraph article details how Rolls Royce booked $1.7bn of aircraft engine sales at last week’s Farnborough Airshow and has an order book of 5,100 civil aircraft engines with double digit growth in marine engine sales too, life has rarely looked so good for them.

Part of the disconnect comes from timing, different parts of the economy (and in that I include consumers) will be seeing good conditions and bad at different times, even in a prolonged boom it isn’t all good news. Consumers were supported by stimulus measures, tax breaks and rapidly falling interest charges in the 12 months following the crisis. Some of those measures have since been withdrawn and as a result consumer confidence is falling as evidenced by car sales. Companies have cut costs, including workers, putting them in a much leaner position and allowing them to benefit from a return to growing order books. Major corporations are also benefiting from overseas revenues, particularly from operations in emerging markets or in the case of the companies above sales to those markets. Company results are also backward looking, reflecting the last quarter results whereas Consumer Metrics Institute results tracks daily changes because of the lagging relationship of GDP give a forward looking picture. What we could see in two quarters time is a downturn in company results as the impact of OECD stagnation or worse double dip work through onto company sales and profits. The fear for many will be if Asian markets slow at the same time, it’s unlikely we will see a global double dip but an OECD double dip is a probability based on the Consumer Metrics Institute modeling.

So expect the financial pages to remain with pointers in opposite directions. Corporate profits are likely to be good throughout the rest of this Q2 reporting season but not everybody is reporting good results. US Steel still fell below analyst expectations as did AK Steel. Nucor cautioned that H2 prices could weaken further may prove prescient by the end of this year as a range of industries begin to see a slow down feed through into results.